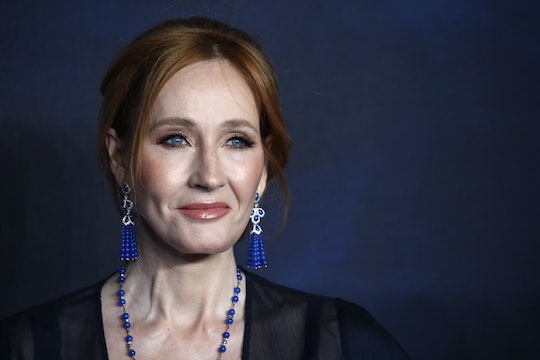 Fantastic news, wizards — renowned author J.K. Rowling will release four new Harry Potter eBooks starting in June. The magical series is non-fiction and it will be published under Rowling's Pottermore company, aka fans' go-to source for everything Harry Potter. I don't know about you guys, but I think this news calls for a Butterbeer toast.

Pottermore broke the siriusly amazing development about the eBooks via its website on Friday, May 24, revealing that the shorts will be called Harry Potter: A Journey Through..., and that the works are adapted from the audiobook Harry Potter: A History of Magic. As you might already know, the audiobook was inspired by the British Library's exhibition of the same name.

The series aims to take readers "back in time once again to learn about the traditional folklore and magic at the heart of the Harry Potter stories," according to Pottermore. And to paint a full picture, the series shorts will "feature notes, manuscript pages and charming sketches as previously seen in Harry Potter: A History of Magic."

So, what topics can you expect? The four upcoming books are titled, according to The Oprah Magazine:

As for release dates, the first pair, Charms and Defense Against the Dark Arts, and Potions and Herbology, it will debut on June 27. The others release dates will be announced sometime in the future.

Although this series might come as a disappointment to fiction lovers, it's a major win for those who wish to dive deeper into the world of Harry Potter. If you're a diehard fan who already knows too much about the world of Hogwarts, then these eBooks are definitely for you.

Potterheads reacted to the news as one might expect, praising the powers that be for gifting them with the shorts.

"Did Potterheads save the country in their past life because damn we are so blessed," someone joked.

Will include notes, manuscript pages and sketches.

"Yasss bring it on!" someone else penned.

Another fan wrote: "This is so cool omg."

Pottermore touched on the enthusiasm in a statement, sharing, according to Mic:

It seems part of human nature to want to believe in the unbelievable: from the bestiaries and cabinets of curiosities of the medieval period onwards. We think that truth and myth are easily distinguished today, but magical creatures and the stories around them continue to fascinate us – and they are as central to the Harry Potter stories as Harry, Hermione and Ron.

It's clear that June 27 can't come soon enough for Rowling's most devoted Potterheads. And given the rich history the Harry Potter: A Journey Through eBooks plan to explore, it's not difficult to see why.