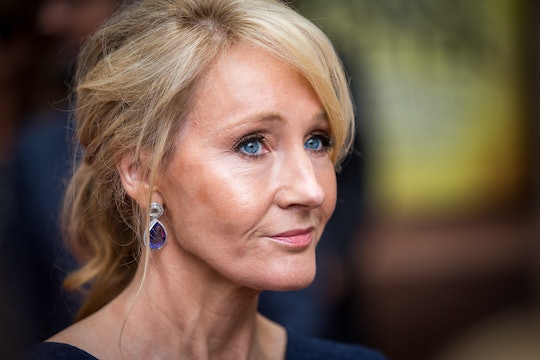 J.K. Rowling’s Response To The Burkini Ban Hit The Nail On The Head

After several towns in France banned burkinis from the beach, women sitting on the sand in conservative clothing found themselves being fined and even asked to leave. Though there are persistent questions about the ethics and enforceability of a burkini ban, former French president Nicolas Sarkozy's take on the decision prompted one of Britain's most famous authors to speak out. J.K. Rowling's response to the burkini ban illuminated the dangers of policing clothing choices.

France recently endured multiple terrorist attacks attributed to people using radical religion as their motivator, the most recent on Bastille Day when a man killed 86 in Nice, The New York Times reported. The country has long supported secularism, but the burkini ban seems to specifically target Muslim women. The design of the burkini allows swimmers the comfort of a bathing suit while respecting the clothing guidelines many Muslims choose to adopt; according to Reuters, the designer, Aheda Zanetti, said that the garment "was designed for freedom, flexibility and confidence." Now, burkinis have been banned from dozens of beach communities in France based on the idea that they do not conform to France's secular culture.

The new rule prompted officials patrolling the beaches to confront women wearing modest clothing, though The New York Times indicated that not all wore burkinis. The ban allows officials to fine the women and, when deemed necessary, to request that they leave the beach. Beyond legal repercussions for wearing a burkini or similar modest clothing, there have been social repercussions. One woman asked to leave the beach in Cannes noted that other beachgoers surrounded her, reportedly making statements about her clothing and religion, according to The New York Times. Sarkozy may be unsympathetic; according to the Washington Post, Sarkozy called burkinis a "provocation" and said that the French "don't imprison women behind fabric." Harry Potter author Rowling responded with a tweet:

The feminism of burkinis is as hotly debated as the feminism of bikinis, but Rowling emphasized the irony of criticizing a woman for dressing too modestly. The burkini ban is justified by officials for reasons of secularism and appropriateness. Relatives of the woman asked to leave the beach in Cannes for "wearing a tunic, leggings and a head scarf" asked why, if the ban is to uphold secularism, the police did not fine people wearing crosses; The New York Times reported that a policeman said they wouldn't patrol for crosses. The exchange suggests that even if the burkini ban were created to protect secularism, it disproportionately targeted Muslim women.

This is a premise the French government hasn't altogether rejected. Nice's deputy mayor, Christian Estrosi, said he condemns "these unacceptable provocations in the very particular context that our city is familiar with," according to The New York Times. Sarkozy advocates a more widespread ban of religious symbols, the Washington Post reported. But if all outward expressions of religious identity aren't banned for the moment in public places, then a burkini ban may not be adequately justified by arguing that it is designed to protect secularism.

Some say the burkini is inappropriate, including Estrosi. According to The New York Times, he suggested that Muslim women wore the garment specifically to provoke onlookers. That may be construed as a drastic oversimplification and warping of religious tradition. It also undermines a woman's ability to choose how modestly she dresses in public, whether that choice is related to her religion or not. Women wear the burkini for a variety of reasons: the Washington Post reported that the creator of the burkini, Zanetti, found that only about 40 percent of buyers are Muslim. In some countries, women are required to cover their heads or wear garments of a certain length; France offers women the opportunity to create their own style.

And, swimwear is always evolving. According to TIME, European women in the late 19th century used to add weights to the hems of bathing costumes to ensure they wouldn't show too much leg. But to Rowling's point, just as thongs and going topless have been vilified as objectifying, now the most modest swimming garments are deemed too modest. Rowling suggests that a woman's clothing choices should be her own. Whether she wears a broad-brimmed beach hat or a head scarf, a burkini or a bikini, her decision deserves respect. And if a country is truly going to balance secularism with freedom of religion, then individuals need to be comfortable living out their faith in public, however that may look.