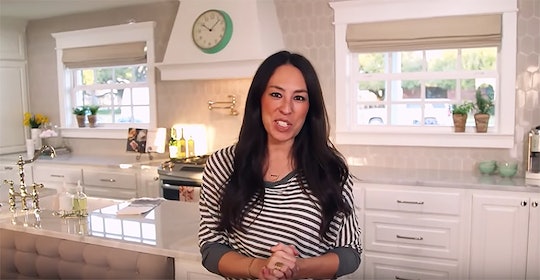 Joanna and Chip Gaines welcomed their fifth child, Crew Gaines, into the world in June. And now that some time has passed since the 4-month-old's birth, Joanna Gaines is back to wielding her design magic. The best part? This photo of Crew watching Joanna Gaines work proves the Fixer Upper alum has transitioned back into her career quite smoothly.

When Joanna found out she was pregnant at age 40, she took the news as a welcome shift in her busy life. "It's sweet how, even in the most unpredictable ways, we're given exactly what we need for that exact moment in time," Joanna wrote in an essay for The Magnolia Journal, according to Today. "It wasn't something I could have anticipated. But being pregnant and 'forced' to slow down has been a gift."

Rest assured Joanna and Chip weren't kidding when they talked about slowing down. The couple — who ended Fixer Upper in April after five seasons — have shared a ton of lazy day photos with baby Crew since his birth, including some shots of their family snuggling in bed together.

"Walked into this cuddlefest and my heart almost burst 😍," Joanna captioned a July snap of Chip cozying up to Crew and 10-year-old Duke, according to Instagram.

But following some much-needed downtime, Joanna and Chip jumped back into work. And on Tuesday, Joanna took to her Instagram Stories to share some shots of herself with baby Crew on set.

"Quiet on set please," Joanna captioned an adorable shot of Crew sleeping in her arms, according to Instagram Stories.

Joanna also posted a snap of her colleague holding Crew, writing: "Thanks John!"

The design maven ended her cute display with a shot of Crew watching her work via a camera monitor. She said: "Watchin' his mama." Aww.

Of course, not every parent can take their newborn to work, and there are plenty of parents out there who don't have a strong support system like Joanna enjoys.

Another factor in Joanna's success at multitasking? Joanna isn't juggling "four kids aged 4 and under" at the moment.

“I had four kids aged 4 and under. There were so many diapers, and it was chaos," she recalled, according to People. "Those years just flew because there was so much happening in the moment. I feel like I can really take this one in and relish these moments.”

As for Joanna and Chip's plans for the future, it looks like they're continuing to expand their empire in Waco, Texas. In fact, the couple just celebrated the 15th anniversary of their Magnolia brand.

"15 years ago... Happy Anniversary Magnolia!" Joanna captioned a throwback pic of the pair at their first Magnolia store, according to Instagram. "... I have zero regrets though about stepping out and just going for it- this shop, this business, it has our hearts."

Considering the couple still have goals they want to achieve with Magnolia, expect more photos of Crew at work with his parents to come. Chip and Joanna are experts in the art of multitasking, after all.