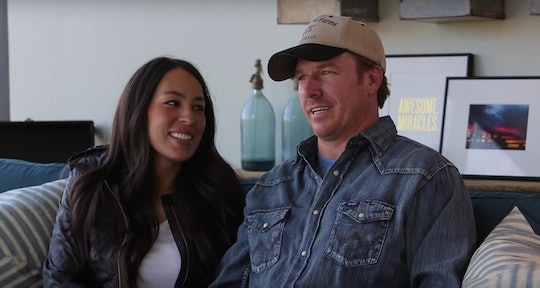 Joanna Gaines' Baby Shower For Baby No. 5 Had The *Most* Adorable Theme

The Gaines family is preparing to welcome a seventh member to their tribe, which fans can assume means a few things: the baby will probably have the most aesthetically perfect nursery in the history of nurseries, and oh yeah, the shower will be themed after the one thing that they love more than shiplap. Over the weekend, Joanna Gaines celebrated her baby shower for baby no. 5 and it was book themed, and included everything from life-size book sculptures to decorations made from cut up pages from novels. It was really creative and completely picturesque, but then again, what would you expect from the family that's literally famous for designing swoon-worthy spaces?

Joanna shared some of her favorite moments from her baby shower on Instagram, and fans have already started reading into what they could mean (pun intended). "I like big books and I cannot lie," she captioned a series of photos from the big day. "Blown away by the creativity and thoughtfulness of my friends – just the cutest book shower ever for baby Gaines! Feelin' the love... now I just need to figure out how to shove these books in my car so I can get them to the farm!"

"Best baby shower ever!!! This makes me want another baby just to have a shower like this!!" one fan commented.

"That is very creative and sweet!! Prayers for a quick delivery, Healthy baby and speedy recovery!!" another said.

Many also inquired as to where her friends managed to find books so large to decorate with, or how they styled the balloon arrangements. (Chances are, at that scale, they're papier-mâché, but that's just speculation.)

Joanna announced her pregnancy earlier this year, after she and her husband Chip found out that they were expecting at the end of 2017. Chip uploaded a photo to Instagram holding Joanna's stomach, with the caption reading: "Gaines party of 7.. (If you’re still confused.. WE ARE PREGNANT)."

Though fans did know pretty quickly that the family would be expanding, it was the couple's four kids who actually knew first. "When they were younger, we waited to tell them," Joanna told Country Living. "Typically we'd say, hey let’s wait a couple of weeks before we say anything, but we told them that day. Out of anybody, we were most excited to tell the kids. Now that they’re older, they get it and understand." She also explained to Country Living how she made the big announcement:

I had all these onesies out that said "big brother" and "big sister" and I made them turn around and look at it. And it took them all a second to figure what the heck it was about.

In March, the couple announced that they were having a little boy in the sweetest way possible: by incorporating some help from a very tiny fan of theirs. Entertainment Weekly reported that while attending an event for the Tim Tebow Foundation, Chip enlisted the advice of a little boy named Gage, telling him that as he was expecting a son, he needed advice for names that began with the letter D.

"Alright, alright… if we’re going to announce the gender of our #5th child. It might as well come from my new friend #Gage! Take it away my man," he later tweeted along with a video of the moment.

In April, Joanna took to her blog "At Home" to share an update with fans on how the family was doing and what was up next for them. In the latter part of the post, she wrote that because it had been so long since she had her last baby, she feels as though she's re-learning how to be a mom.

Pregnancy has been so fun, in fact my two favorite things to do are take naps and eat! Since it’s been over eight years since I was pregnant with Emmie Kay, I joke with my friends that it feels like it’s my first time being pregnant. The best thing about all of this is the excitement that my kids have shown for their new baby brother. Since I had our first four babies so close to one another, none of them actually remember me being pregnant.

She concluded saying: "They love my growing belly (and boy is it growing), and they cannot wait to meet him. I truly believe this baby is a gift from God for our family in this season."

A gift it is, and though it means that the family is going to be shifting their priorities, between their restaurants, product lines, books and new babies, there's enough to keep fans entertained as they enter this new chapter.