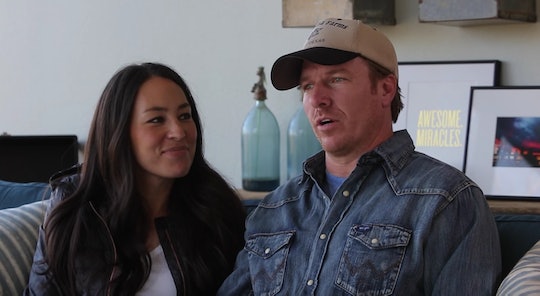 Chip and Joanna Gaines became famous for focusing on other people's homes on their former HGTV show, Fixer Upper. But now that the show has come to an end, the couple is now focusing on themselves and their newest addition to their family of five: 2-week-old son Crew. Fans have been so happy Chip and Joanna have allowed them follow along on their journey with their new bundle of joy, and these new videos of Joanna Gaines' daughters cuddling with baby Crew, posted to her Instagram Story over the weekend, are just the icing on the cake.

Before the Chip and Joanna welcomed Crew into the world, they were already pretty seasoned and experienced parents. Chip and Joanna are parents to four other children, according to Country Living: 13-year-old son, Drake; 11-year-old daughter, Ella; 10-year-old son, Duke; and 8-year-old daughter, Emmie. But it had been a while since the Gaineses had a newborn in their house — so, of course, it makes sense that the older Gaines kids are just as happy to spend time with their newest and youngest sibling.

Joanna's posts on her Instagram Story from Saturday make this very clear. In the videos, Crew looks so peaceful, swaddled and laying next to his sisters, who were taking turns rocking alongside him in a hammock outdoors. "Taking turns..." Gaines captioned the second video, where Joanna's youngest daughter, Ella, lovingly looks into her brothers eyes. The interactions between the siblings might just be the sweetest thing you'll see all day.

Although the videos were only temporary on Joanna's Instagram Story (and didn't allow for comments to made on them), if fans had the ability to comment on the videos, they would likely flood them with compliments of how cute her kids are. You can tell that those girls are so happy for the opportunity to be big sisters, again.

When they were younger, we waited. Typically, we'd say "Hey, let's wait a couple of weeks before we say anything," but we told them that day. Out of anybody, we were most excited to tell the kids. Now that they're older, they get it and understand.

In a letter to fans ahead of the Fixer Upper finale in April, Joanna revealed that her kids were excited for Crew's arrival because this was the first time throughout her pregnancies that they understood what was going on, according to People, Joanna wrote:

Since I had our first four babies close to one another, none of them actually remember me being pregnant. They love my growing belly (and boy is it growing), and they cannot wait to meet him. I truly believe this baby is a gift from God for our family in this season.

You truly can tell how excited her kids were for their mom to deliver their new brother, thanks to photos taken from the hospital when she gave birth. You can practically feel it in this photo, posted to Joanna's Instagram account shortly after she gave birth.

With all of her kids so happy and totally in love with their new baby brother, it sounds like Chip and Joanna will have more than enough help changing diapers, keeping the baby calm and occupied, and tending to the baby's needs while they do their part to run their home improvement and design empire.