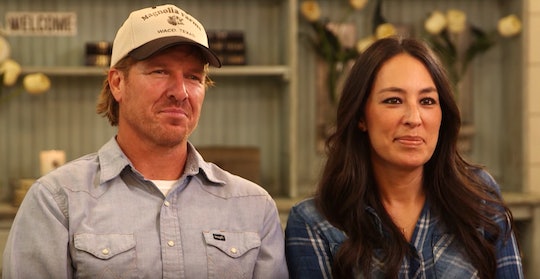 Chip and Joanna Gaines are used to having their hands full and keeping themselves busy. The former Fixer Upper stars and owners of multiple businesses in their hometown of Waco, Texas are always doing something — between running their businesses, flipping homes, or being parents to their five children. But before they welcomed their fifth child, a son named Crew, into the world last week, it had been a while since Joanna had experienced life as a mom to a newborn. And now, Joanna Gaines opened up about how giving birth to her son, Crew, was different this time around with four kids, which is something that parents will definitely be able to understand.

The beginning of this year was very bittersweet for fans of the Gaines'. Even though people were sad about the fact that the final episode (ever) of their show, Fixer Upper, aired on HGTV, the couple also announced at the beginning of the year that they were expecting their fifth child. Considering the Gaines' were already parents to four children — 13-year-old Drake, 11-year-old Ella, 9-year-old Duke, and 8-year-old Emmie, according to People — fans knew that the couple was more than capable of handling another newborn.

But, Gaines told People that things are just a bit different this time around so many years later. "I think it's sweet because they're older now and I can see them wanting to be a part of this," Gaines said. "We're rallying around this baby, which I feel is a sweet gift to our family."

Joanna told People that things were very different when she gave birth to her last child eight years ago, which was a time before the HGTV show and before fans knew who the Gaines' were. Joanna said, according to People:

I had four kids aged 4 and under. There were so many diapers, and it was chaos. Those years just flew because there was so much happening in the moment. I feel like I can really take this one in and relish these moments.

She is so right. Although her children still need attention, an 8-year-old needs a little less attention than a newborn baby or a toddler. So you can get an idea why Joanna is excited to relish these moments as a mother to a newborn and soak it all in.

This isn't the first time that Joanna has said something in this vein. In a new interview with Joanna's magazine, The Magnolia Journal, Joanna revealed that she was looking forward to "slow it down" with her fifth child. Joanna said, according to KMOV St. Louis:

I look at this as like another opportunity to really embrace this moment with a newborn, my kids are so excited about it, um, but to slow it down a bit, you know I think early on when my kids were younger everyone kept saying they grow up so fast, you just hear that and think, well now I think they really do. I have a teenager, um, and so this is such a special gift, the baby thats coming soon, um, I think I really just want to embrace those moments — I want my kids to cherish that, and so we're really excited.

Without Fixer Upper on air for the first time in years, Joanna and the Gaines' will have plenty of time to cherish those moments with Crew and enjoy every single moment about having a newborn — from the constant diaper changes, feedings, and all of the moments in between. From the sound of it, the Gaines family is more than excited for these moments, just based on Crew's birth announcement alone where Joanna wrote that the family was so "in love" with Crew who was a "sweet surprise from day one."