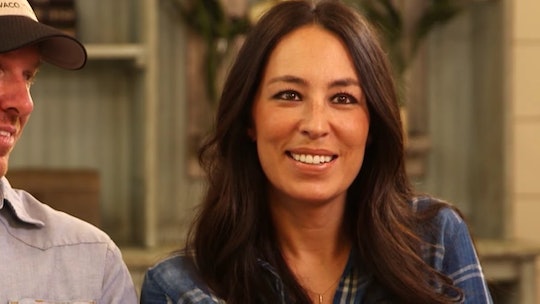 Joanna Gaines Opens Up About Feeling More Confident After Baby No. 5

Earlier this summer, Fixer Upper's Joanna and Chip Gaines welcomed child number five. Joanna Gaines, who turned 40 this year, recently opened up about how her fifth pregnancy was different than her four previous pregnancies. In an essay for the couple's magazine Magnolia Journal, Joanna Gaines talked about feeling more confident in motherhood this time around.

For the latest issue of Magnolia Journal, Joanna wrote a personal essay called “Made for This,” People reported. “I don’t know if it’s because I’m a little older, but this time around I am more comfortable in my own skin, sure that I can do this," Joanna wrote in the essay, according to People. "Confident that I was made for this very thing in this very season."

But even though she felt more comfortable about the prospect of welcoming a new baby, she faced more challenges in this pregnancy than in her past ones (her last pregnancy before this one was eight years ago). “I am 40, and pregnancy this time was different,” Joanna wrote. “I have always really enjoyed being pregnant — I tend to feel my best during those nine months. This time I felt a little more worn out than usual.”

Joanna also explained that this fifth pregnancy taught her that anyone can do anything they put their mind to (along with a construction reference, to boot). She wrote in the essay, according to People:

I believe that each of us, in every circumstance, has what it takes — that built within the construction of who we are is whatever that moment in time requires ... We all will have trials, we all will have miracles, and because of grace, I believe we have it in us to handle both — no matter what that looks like.

Joanna gave birth to Crew Gaines on June 21 of this year. "Our baby boy, Crew Gaines, is here and we couldn’t be more in love," Joanna wrote alongside photos from the hospital, a few days after Crew was born. "He made an unexpected (and speedy) entrance into the world two and a half weeks early - which is fitting given he was a sweet surprise from day one. Thank you for all your thoughts and prayers. We are so grateful."

The Fixer Upper host further opened up about Crew being a surprise in her essay for Magnolia Journal. She wrote, as per People:

Chip and I made a choice to take some time off this past year because it seemed best for us in that season ... Only a few weeks later I found out I was pregnant.

The fact Joanna wrote in her Magnolia Journal essay that she is feeling so confident is really important, because she has previously opened up about her struggles with confidence. In an interview with Darling Magazine this past February, she wrote:

I don’t think confidence has ever really been one of those things that came naturally for me. If people thought I was confident, it was really just the way I masked my insecurity, because I didn’t want people to really get to know the real me.

And last year, Joanna opened up about some of the challenges and rewards of motherhood in an open letter on Motherly. She wrote:

Motherhood can be difficult. It’s not an instant gratification thing all the time. When your kiddos are just babies and you’re changing diapers or listening to whining constantly, it can feel overwhelming. But I want to encourage you, because one day you’ll be sitting around a table for your birthday breakfast and you’ll realize that their little hearts are thankful for you.

Joanna is clearly so happy to have a family of seven, and it's awesome that she is feeling so confident and comfortable in her new role as mom of five.