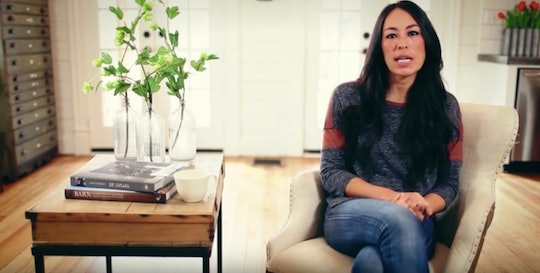 It's an exciting time for the Gaines family, with their hit show coming to an end and a baby on the way. Since the couple likes to keep fans informed about the goings on of their lives directly, on her blog, Joanna Gaines opened up about her fifth pregnancy as Fixer Upper comes to an end this week. And it sounds like things are going really well.

Chip and Joanna Gaines have four other kids: Drake, 12 years old, Ella Rose, 9 years old, Duke, 8 years old, and Emmie Kay, 7 years old. And it's been eight years since they had their youngest. Joanna joked in her blog that the timing makes it feel like it's her "first time." She's been taking it easy, too, despite her busy schedule. She added, "Pregnancy has been so fun. In fact, my two favorite things to do are take naps and eat!"

The home design guru explained, "The best thing about all of this is the excitement that my kids have shown for their new baby brother. Since I had our first four babies so close to one another, none of them actually remember me being pregnant." Joanna continued:

They love my growing belly (and boy is it growing), and they cannot wait to meet him. I truly believe this baby is a gift from God for our family in this season.

So the family is excited, but it's also a little "bittersweet" she wrote given that Tuesday marks the final episode ever of Fixer Upper. She wrote that they had no idea they were epecting when she and Chip announced that this would be the final season of their construction and design show. She explained on her blog:

If you would have told me that I’d end this season of the show pregnant with our fifth baby, I would’ve laughed. Like the entire Fixer Upper opportunity as a whole, life has a way of surprising us. With our little ones getting bigger, we had this gut feeling that it was time to step back and focus on them and our businesses here in Waco, Texas. And although that’s why we thought we decided to step away from the show, we now realize with this little one on the way that there was a bigger plan in place for us all along.

There's a lot going on at the moment right now for the family. In her blog post, she promised that she and Chip would likely keep doing construction and design given that it was sort of their *thing* way before the show ever aired. She noted that right now, they're renovating some flip homes and building about 20 houses in Texas from scratch. "Once these homes are a little farther along," Joanna said, she would start sharing pictures and show them off to everyone. By then, people will be ready for some more Gaines updates.

Joanna added that she plans on working on her design book this month and Magnolia Table, her cookbook, is being released later this month.

In addition to that, she's also launching Magnolia Kids, which will have "everything from children’s furniture to accessories." Joanna joked that, "there may be some baby stuff, too, because of course that’s all I can think about!"

In addition to all of that, Joanna and Chip opened up Magnolia Restaurant and it all sounds delicious. She shared:

If you come visit the restaurant, some of Chip’s favorites are the Farm Eggs Benedict, tater tots, the bacon and eggs appetizer and of course Chip’s Ham Sandwich. I am currently craving the pancakes, chicken salad sandwich, lavender latte and the Gaines Bros Burger with the jalapeño drip jam. My stomach is growling as I type this!

With all of these business ventures launching, ending this chapter of their television lives, a baby on the way, the Gaineses have a lot on their plate. Obviously, they really like it that way.