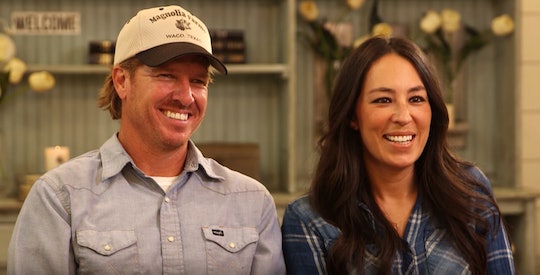 Joanna Gaines Revealed Baby No. 5's Name In These Heartwarming Photos From The Delivery Room

Although home improvement fans are disappointed that HGTV's Fixer Upper is no longer on air, they have to be happy for the stars of the show, Chip and Joanna Gaines, who recently welcomed their fifth child. After waiting months for his arrival, the couple revealed on Saturday that their baby boy was here! Later in the day, the happy parents revealed even more exciting information about their new bundle of joy. In fact, Joanna Gaines revealed their fifth child's name in a new Instagram post, along with some new photos from the delivery room that are enough to melt anyone's heart.

Knowing that their baby boy had arrived both happy and healthy, it's only fair to wonder about the next logical question: What is this little guy's name?! Fortunately, Joanna and Chip did not keep their fans waiting for too long. According to Joanna's Instagram post, they named their son Crew Gaines and the whole family "couldn't be any more in love." Awwww.

In one of the photos, shared to Joanna's Instagram account on Saturday night, Joanna can be seen looking over at Crew from her hospital bed, as he is swaddled in a green blanket (and fans can get a good look at his adorable face). In the other photos (swipe through her post's slideshow), Joanna is seen cuddling her newborn, introducing the baby to her four other kids, and staring deeply into Chip's eyes (just in case fans forgot how much Chip and Joanna love each other).

Seriously, all of it is just so gorgeous.

As Fixer Upper fans know, Chip and Joanna have four other children. There's 13-year-old Drake, 11-year-old Ella, 9-year-old Duke, and 8-year-old Emmie Kay, according to People. And in case people didn't notice, there's a pattern in the Gaines family when it comes to their names — Chip and Joanna have alternated between picking names that begin with the letters "D" and "E" for their children, as reported by Country Living. As such, Crew's name definitely stands out among his siblings' monikers.

While some people might have been surprised that Chip and Joanna strayed from tradition and picked a name that began with a different letter, they shouldn't be. During an interview with TODAY in April, Joanna hinted to fans that she wanted to her son to have a name that began with the letter "C", according to Southern Living. Joanna said, according to Southern Living:

Based on her son's name, it is clear that she got to pick it — go Joanna.

While there could have been many reasons why Chip and Joanna decided to name their son Crew (which they have not yet revealed), the origin of the name is special. The name Crew has an English origin, according to Nameberry, and didn't begin to gain popularity until 2010. But before then, Crew was typically seen as a last name, according to Oh Baby Names, and means "a group of people working together." So maybe that fan was right — Chip and Joanna's baby boy completes their own personal crew. And judging by Joanna's most recent Instagram post, her kids are so excited that Crew has joined their group.

Crew's name wasn't the only thing that Joanna revealed in her Instagram post — she also detailed a bit of her birth, too. In the post, Joanna also let fans know that Crew's arrival was a bit unexpected. "He made an unexpected (and speedy) entrance into the world two and a half weeks early — which is fitting since he was a sweet surprise from day one," Joanna wrote in the photo's caption.

Such a sweet surprise indeed. Crew could not be any more adorable and his name is perfectly fitting.