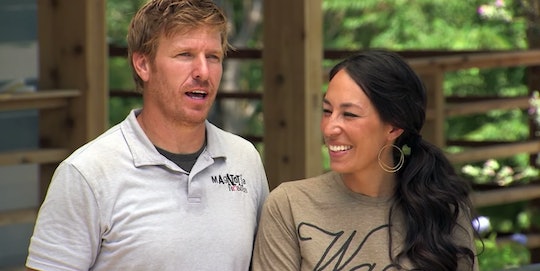 Chip and Joanna Gaines are basically experts when it comes to creating cozy, swoon-worthy spaces, and their own Waco, Texas farmhouse may just be the perfect example of the ultimate family home. It's where the couple spends most of their time when they aren't busy with their various business ventures, including Waco's popular retail space, Magnolia Market at the Silos, and as parents to five kids, having family time has long been a priority. But recently Joanna Gaines said baby Crew has turned her whole family into homebodies, according to Country Living, and that, with a baby in the house again, they all seem to want to stay at home and spend more time together than perhaps ever before.

In an interview with Parade earlier this month, Joanna said, "I think Chip would agree that we’re both homebodies, and that there's no place we'd rather be than at home with our kids." But while it sounds like that has always been the case, Joanna added that, welcoming their now-6-month-old son, Crew, into the mix only solidified their desire to snuggle in at home together. Speaking about her four older children, who range in age from 8 to 13 years old, Joanna said, "Since bringing home Crew, I've noticed that none of us are in a hurry to be anywhere but there. For Chip and me, there’s nothing sweeter than that!"

From the sounds of it though, they've lately been spending their quality time at home working on a pretty special project together. On Monday, Joanna announced on Instagram that she and her children had actually authored a new children's book called The Gardeners, based upon "their journey in the garden."

Joanna explained that the sweet storybook — which comes out Mar. 26, and is now available for pre-order — is about "trying and failing and trying again and never giving up," and added, "we hope it inspires you and your little ones to get outside, get your hands dirty, and grow something great!"

Book-writing aside though, Gaines previously shared that the number one activity in their family these days seems to actually be fighting over cuddle time with the youngest member. In October, at the Gaines' annual "Silobration" event at Magnolia Market, according to Country Living, Joanna said,

[Chip and I] never get to carry the baby because from the time I wake up, they get in line. Drake’s number one, Ella’s number two — they fight over who gets to hold him all morning, all night. It’s so sweet.

And in November, according to USA TODAY, Joanna told TODAY's Savannah Guthrie and Hoda Kotb that, thanks to her older children, having an infant again has been "easy." She said, "They are obsessed with him. It really is one of those things where I have to fight to hold him."

Given that so many of Joanna's Instagram photos these days also seem to show either herself or various family members snuggling with the little one, it definitely doesn't seem like she's exaggerating when she says that having Crew around has encouraged them all to slow down and enjoy having quiet time at home. And given how busy they must otherwise be, that sounds like a real blessing.

Of course, life with an infant can still be hectic, even on the best of days, so it's likely that Chip and Joanna still have their fair share of stress and exhaustion. But as they seem to be learning, having a brood of older children completely smitten with their younger brother definitely helps when it comes to child care duties. And it means that, in the end, they're likely even closer now than they've ever been before.