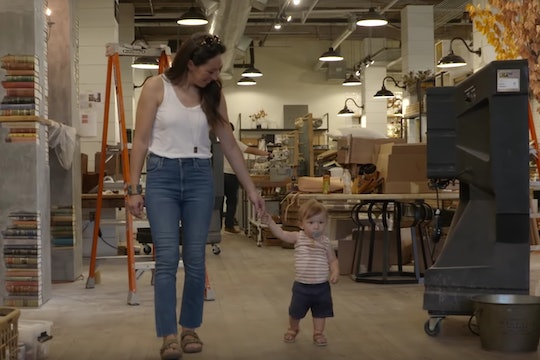 Joanna Gaines Says Youngest Son, Crew, Is Growing Up In Their Shops

Chip and Joanna Gaines are known for their hands on approach to everything — from raising their kids to renovating homes. The lives of the former HGTV stars revolve around their projects and their shops at the Magnolia Market, so it only makes sense that they're raising their kids (including 1-year-old son, Crew) in that exact location. It's adorable to hear Joanna Gaines say Crew is growing up in their shops, because it proves that their family isn't afraid to get their hands dirty.

In a YouTube video, posted to Magnolia's channel late last week, Joanna shared that Crew has practically learned to walk in their stores. In the video, Crew can be seen happily touching merchandise in one of the stores. Needless to say, it has caused Joana just a bit of stress. "Crew — a year ago, he was in my arms, sleeping most of the time," she said. "And now he's walking and I definitely have to keep my eyes on him. It's a different ball game with a one year old who walks in the shop."

Joanna has some experience with this with her other four kids. "When Drake was one and he was walking, everything shifted for me as a shop owner," she said in the video. "Because when he was crawling, it was cute and sweet, but all of a sudden he starts walking and he can start grabbing stuff and pulling things down."

Needless to say, Crew will have plenty of places to roam around once he becomes a very rambunctious toddler.

And people shouldn't expect Joanna to leave Crew at home while they work any time soon. In an essay penned for their magazine, Magnolia Journal, Joanna wrote that she and Chip want their kids to be with them while they work in their offices, according to People. "My work is undoubtably more inspired when my kids can be a part of it, and I'm a better mom when my passion for creativity plays a role in how I parent," she wrote.

As seen in the YouTube video, Crew is definitely a part of her work — dirty shop knees and all.