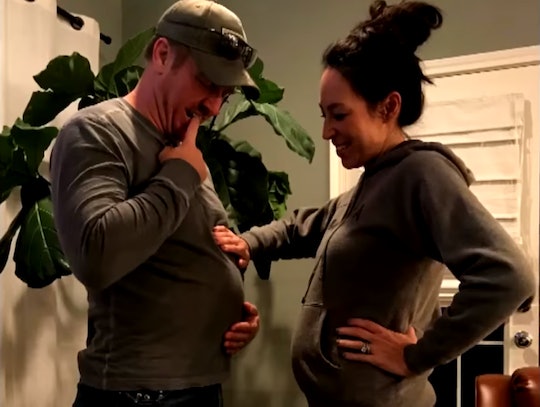 Joanna Gaines Shares Her Pregnancy Cravings, & They Will Legit Make Your Mouth Water

Those "stars are just like us" moments can make fans feel closer to the celebrities they admire, and if you're a Fixer Upper fan who's currently gestating (or vividly remembers those days), you might be wondering if you've got anything in common with the series' star, who's expecting her fifth child this summer. Well, here's your answer: Joanna Gaines shared her pregnancy cravings on Instagram Thursday night, and no matter what kind of food you're into, you'll likely find at least one item on her list that does it for you.

Joanna and her husband, Chip Gaines, are busy developing a restaurant in addition to that human, and she took to social media to promote the upcoming Magnolia Table in a perfectly plated shot that will have fans clamoring for reservations. People reported that it'll be a "breakfast spot," but the menu is also set to include burgers, pies, and "Chip's famous ham sandwich," so it's not too much of a stretch to think that they might add "Joanna's gorgeous melty chocolate chip cookies" to the dessert section. At least, they better, because I can literally smell them right now, and TBH, I'm kind of mad at Joanna for teasing us.

Not a cookie monster yourself? Well, there's no accounting for taste, but in the caption of the post, Joanna ran down the list of everything else she wants to cram in her face:

Woke up this morning at 2:30 AM and was craving fruity pebbles, a pimento cheese sandwich, chicken spaghetti, deviled eggs, and ranch dressing. Didn't have any of that so I made myself some cookies. With all the restaurant's final tastings, the cookbook (yes these cookies are in it!), and this pregnancy-I'm definitely growing at a record rate #magnoliatable

Come on, lady, don't make us bake them! There's still no word on exactly when Magnolia Table will be up and running — an early January Instagram post by Joanna said it would open "soon," and last week, she shared a video of the sign being installed — but her cookbook, Magnolia Table: A Collection of Recipes for Gathering, won't be out until April. You can preorder it through the links on her website.

In the mean time, we'll all have to start experimenting in our kitchens and try to unlock the secret recipe ourselves. I recommend starting with Martha Stewart's guide to baking chocolate chip cookies according to your preferred texture (crispy, chewy, or cakey) and then adjusting accordingly. You may have to make several batches. Do it for science!

So let's talk about those other cravings for a minute, just to take our minds off of those cookies. I confess: I'd never heard of pimento cheese before, but this "Southern delicacy" sounds legit. Grated cheddar and mayonnaise make up the base of this spread, which can also be integrated into mac and cheese or a spicy dip. Head over to Southern Living for the recipes.

At first, I assumed that "chicken spaghetti" just meant a boneless breast in the marinara, or perhaps a colloquialism for chicken Parmesan, but it turns out it's another Southern Thing™, and it, too, sounds delightful. I already have quite a few "cream of whatever" soup-based chicken casseroles in my repertoire, but I just might work this one in, too.

At this point I should probably mention that I am not currently pregnant (or maybe I should have done that earlier), but still, I'm crushing hard on all of Joanna's cravings. Fruit Pebbles? Yes, please; they're clearly superior to Cocoa. Ranch dressing all the way, but only Hidden Valley, and never on salad (try dipping pizza in it!). And as for deviled eggs... Unlike Joanna, I do not have a cookbook coming out anytime soon, so you can pry my secret family recipe from my cold, dead hands. Or maybe just bribe me with a Magnolia Table gift certificate.