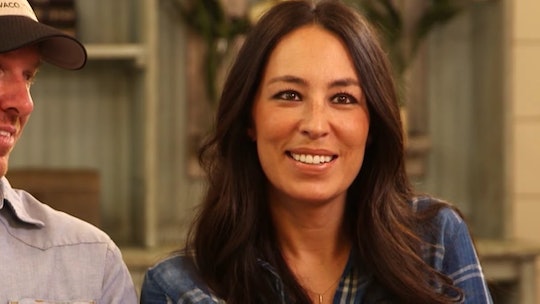 If you live in an area of the United States affected by the recent polar vortex, then it's likely your kiddos have enjoyed a few snow, ice, or sub-zero days off from school. Which means sleeping in, loafing around in pajamas all day, having entirely too much screen time — and maybe even sledding or playing in the snow — likely went down, too. Because when you're a kid, there's nothing quite like a snow day. But when you're a kid in Texas, these snow days are even fewer are further between. And Joanna Gaines' son Crew making snow angels in this adorable photo is the purest thing you'll see all day.

As People reported, the former HGTV star took to Instagram on Sunday, Feb. 3 to share a photo of her youngest that is sure to melt your heart. Although it isn't clear where, exactly, the snap took place, Joanna posted a shot of baby Crew lying in the snow while rocking a snowsuit from The North Face. Even better: It appears as if he just made the perfect snow angel around himself. "My very own snow angel. ❄️," she captioned the photo. Her Instagram followers simply swooned. One person commented, "This is the most adorable thing I’ve ever seen!!"

Another follower declared, "The whole world in that smile! 🙌😍🤗😘."

Yet another fan chimed in with, "❤️ I think you may have just broke Instagram with this picture. ❤️."

Someone else asked what I'm sure everyone was wondering, "Did he do it all by himself? 😂I’m so curious 💕." (But seriously, did he?)

Meanwhile, other Instagram users were totally into baby Crew's outerwear. "They make this in size adult?" one person inquired. Another fan pointed out, "#NorthFace will now sell out of these." In case you were curious, I had a difficult time finding this exact color and style on the company's website. However, if you want to snag this impossibly adorable snowsuit in blue or purple, Amazon has them in select sizes. But, back to the cute baby...

Not long after they announced their show, Fixer Upper, would be ending, the Gaineses revealed they were expecting baby number five, according to Today. As Us Weekly reported, Chip and Joanna Gaines welcomed their fifth child back in June. "Our baby boy, Crew Gaines, is here and we couldn’t be more in love," Joanna wrote on Instagram alongside a photo of herself and baby Crew in their hospital room. "He made an unexpected (and speedy) entrance into the world two and a half weeks early — which is fitting given he was a sweet surprise from day one. Thank you for all your thoughts and prayers. We are so grateful."

Since then, fans of the HGTV stars have delighted in a steady stream of baby spam on both Chip and Joanna's Instagram accounts. From those first delicious newborn snuggles ...

To attending his first football game.

As well as other major milestones. (Like his first teeth!)

The Gaineses' followers simply can't get enough of baby Crew! (And who could blame them?)

Fixer Upper fans might still be heartbroken over the show's ending, but hey — at least they can still get their Chip and Joanna fix via Instagram. Hopefully, the dynamic duo continues to post kid updates, too. Because baby Crew's sweet smile is enough to brighten up even the gloomiest day.