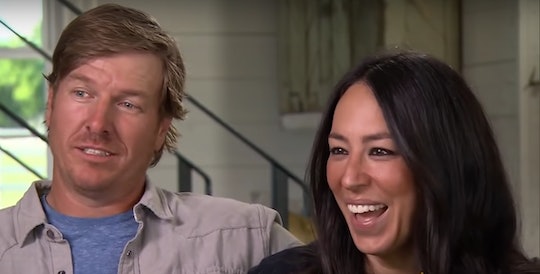 Design whiz and Fixer Upper star Joanna Gaines often appears to basically be superhuman. Not only does she have an enviable knack for flawlessly crafting the perfect modern farmhouse space, she and husband Chip Gaines also run multiple businesses, including the hugely popular Magnolia Market at the Silos, a retail destination in their hometown of Waco, Texas. And, oh yeah, they're also raising five kids while doing it. Joanna and Chip welcomed their newest son, Crew, in June, while their four older children, Emmie, Duke, Ella, and Drake, range in age from 8 to 13 years old. And it definitely sounds like they keep their mom on her toes. On Tuesday, Joanna Gaines shared her sons' sneaky design prank on her Instagram, and it was classic kid humor.

In her latest Instagram Story, according to Country Living, Joanna shared a photo of what looked like an arrangement of transparent plastic letters in her shiplap-filled home, in what was likely supposed to spell out a sweet or inspirational message. In fact, it seems the words were supposed to read, "gather here with thankful hearts," which is really lovely.

But thanks to a little clever rearranging by her sons, the wall now says "gather here with thankful farts," which, let's be honest, pretty much perfectly sums up what life with kids actually looks like.

As much as potty humor may not be her preferred design aesthetic, Joanna seemed to take it all in stride, and captioned the pic, "Well played boys..." And honestly, a quick look at both Joanna and Chip's social media feeds makes it pretty clear that they're all about enjoying time together at home as a family.

In addition to some recent updates, showing the kids helping to put up the family's (massive) Christmas tree, Joanna also recently shared a cute photo of her daughter playing cards with a hand-drawn mask over her face ("#pokerface," was naturally the caption), and another of her two boys sitting on the couch playing old-school hand-held games, Frogger and Pac-Man.

From the looks of it though, Chip and Joanna's kids' sense of humor isn't just limited to leaving funny messages on Mom's wall. On Tuesday, for instance, Chip posted a video clip to his own Instagram, showing a meme about his wife, featuring their infant son, Crew.

In the video, little Crew could be seen slowly sliding down the couch where he'd been propped up by pillows, while the text overlay read, "Me when Jo says...'Can I ask you a question?'"

It's already a cute meme for Fixer Upper fans, but the best part of all? It was actually Chip and Joanna's eldest son, Drake, who created it.

As much as Chip and Joanna's kids might be skilled at giving them a hard time, it's also pretty clear that there's so much love between them. Not only have both Chip and Joanna shared a number of sweet photos of the older kids cuddling with their new brother, the first time Joanna actually shared a shot of her letter wall, the message left by her brood was much different.

In October, Joanna shared a photo on Instagram in the lead up to the launch of her new book, Homebody: A Guide to Creating Spaces You Never Want to Leave, and showed that her kids had actually set up the words to read, "Aint nobody like a homebody," followed-up with a sweet, "Go get em Mom."

In other words, Chip and Joanna's kids might have their cheeky moments, but I think we can all safely agree they're basically the cutest family around. And well, there's also something extremely comforting in knowing that even Joanna Gaines has to put up with fart jokes from her kids all day long, just like the rest of us.