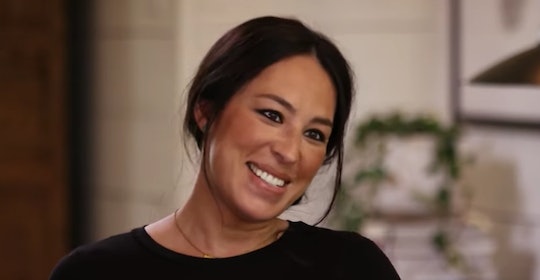 Anyone who has watched even one episode of Fixer Upper knows that Chip Gaines is the outgoing, energetic goofball and Joanna is the organized, meticulous, planner. And together, the HGTV couple -- and their phenomenal house-renovating skills -- are simply mesmerizing. (Which is precisely why the end of their show was so heartbreaking for loyal fans.) So it only makes sense that the Gaines would take on similar roles in their family life -- with Chip being the "fun" parent and Joanna being the "serious" one. However, in a recent essay, Joanna Gaines talked about breaking out of her comfort zone as a mom and embracing her playful side. And honestly, it's a must-read.

If you didn't know, Chip and Joanna have four children together: Drake, 13, Ella, 11, Duke, 9, and Emmie Kay, 8. Back in January, the Gaines family announced they have a fifth child on way, Us Weekly reported. Chip took to Instagram on Jan. 2 to share a photo of himself and his wife standing belly-to-belly. In the shot, both Chip and Joanna are caressing his "bump," and the funny dad confirmed the news by writing, "Gaines party of 7.. (If you’re still confused.. WE ARE PREGNANT)" Chip and Joanna later revealed that after having two sons and two daughters, baby number five would be a boy, E! Online reported.

Now that you're all caught up on Chip and Joanna's family situation, let's get to Joanna's recent insight about her journey as a mom. In a new issue of Magnolia Journal, Joanna opened up about how she forces herself to step outside of what she's comfortable doing -- and how that has helped both her and her children in the long run. “As you can imagine, Chip is all fun all the time,” the expecting mama wrote, as People reported. “He’s the twirler, the chaser, the Nerf gun champion -- and I love watching him light up the kids’ faces every day. His larger than life personality allows me to stay where I’m most comfortable, which, if I’m being honest, usually means the sidelines.”

“I know this time in their lives won’t last forever and I should jump in sooner,” the soon-to-be mom of five wrote. She continued:

Once I’m in it, I’m reminded that I’m more than I thought I was. I know I could choose to be OK with Chip being the playful one for our kids . . . but I think that would mean missing out on moments that are truly beautiful, and that work to refine and sharpen who I am and the kind of mom I want to be.

And all the introverted parents in the world shout a collective, "Amen!"

I can definitely relate to Joanna's sentiments about stepping outside of her comfort zone as a parent. (Granted, I don't have much of a problem being weird and silly with my three kiddos; potty humor is my jam and I'm always down for an impromptu dance party.) However, there are other aspects of parenthood that are difficult for me. Interacting with other parents is my weakness, for sure, because I'm an introvert and deal with anxiety. It's basically the last thing on my list of things I want to do. For the sake of my kids, though, I suck it up and attempt to at least respond to small talk and participate in dreaded playdates. *Shudders*

To me, it's inspiring to see a seasoned mama who is still discovering new things about herself and working to be the best she can be for her children. I'm sure welcoming baby number five in July, according to Country Living, will have even more lessons to offer the Gaines family. In the meantime, thanks for the reminder, Joanna, that we as parents can always strive to become better versions of ourselves -- and that our children are among the best motivators.