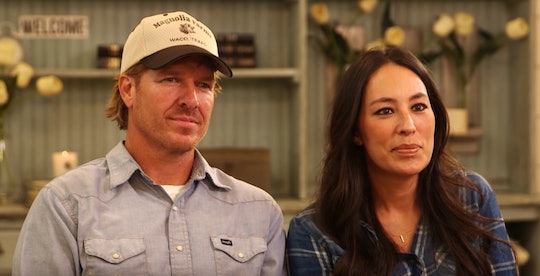 Anyone who watched HGTV's Fixer Upper knows that Joanna Gaines is a super hardworking mom of five. Not only is she a mastermind behind the beautifully designed rooms on Fixer Upper, but she has her own magazine, runs her own restaurant, has her own home furnishing store — and that's just naming a few of her many projects. So when other things get prioritized, it's understandable that she feels a bit of guilt, like all moms. Because of this, Joanna Gaines' Instagram post about mom guilt will hit a note with so many others.

Gaines has a lot keeping her occupied these days. She, along with husband and business partner Chip Gaines, are the parents to five kids ranging in age from their teens to being just a few months old. Yes, the parents to 13-year-old Drake, 12-year-old Ella, 9-year-old Duke, and 8-year-old Emmie, welcomed son Crew into the world earlier this summer, according to People. And Crew has been keeping the couple occupied and entertained over the past four months. "We are just really enjoying this sweet season with a newborn and going to the office every day doing the things we love," Joanna said, according to People.

But that doesn't mean that Joanna isn't aware that her other kids need just as much attention as their newborn child — and her newest Instagram post about this is super touching.

On Sunday, Joanna took to Instagram, where she shared that she spent some time with just her youngest daughter, Emmie. Together they hung out in the garden, picked flowers, pressed them in old gardening books, and wrote their names in the books so they could discover them later. Joanna wrote that this tranquil morning taught her a very important lesson to teach to others — embrace the little moments with your kids. "I know at times it can be hard to to find simple ways to connect with your kids," Joanna wrote. "Especially in the tired and the hard and busy times in life, it can feel like it's all or nothing."

I write all this for any of you out there who may experience "mom-guilt." I promise you that's a never ending cycle that leads to nowhere. Replace the word guilt with grace. Look for grace in the moments, the small wins that lead to greatest investments with their little hearts. From one mom to another, stop being so hard on yourself. Don't spend another second focusing on failure, instead use whatever time and whatever energy you have and look for the moments where grace can be found.

The best thing is, Joanna knows she isn't alone. One 2017 study done in the United Kingdom found that 87 percent of moms feel guilty at some point about not being good enough or doing enough for their kids, according to the Telegraph. When it comes to their home life and work life, 56 percent of women have said that it's difficult to balance their competing responsibilities, according to a survey conducted by the Pew Research Center.

Because of this, some moms (like Joanna) might fear that they're not spending enough quality time with their kids.

But, as Joanna stated, the key to this is spending quality time with every single kid, according to Parents. It can be anything from sharing a meal together, having a meaningful conversation, or pressing flowers into books together — just like Joanna and Emmie did on Sunday. Although there might be other things — like work or dirty diapers — occupying parents, they need to focus on making the most of their time with the kid they're with, according to Parents.

These moments that parents spend with their kids are fleeting — kids won't be young forever. As Joanna said, moms shouldn't be hard on themselves and focus on embracing this moment, right now.

If people weren't aware of this, Joanna's post can serve as a reminder that moms aren't alone in their feelings of guilt. And if it becomes too overwhelming, at the end of the day — they can breathe and enjoy the little, significant moments with their kids.

More Like This
Ryan Reynolds Was Asked If He's Excited To Be A Dad Of 4 & Obviously Cracked A Joke
Meena Harris’ New Children’s Book Tells ‘The Truth About Mrs. Claus’
Quinta Brunson Credits Her Parents For Her Confidence, Now & As A Kid
Andy Cohen's 3-Year-Old Son Ben Has Officially Taken Over An Important Hanukkah Tradition