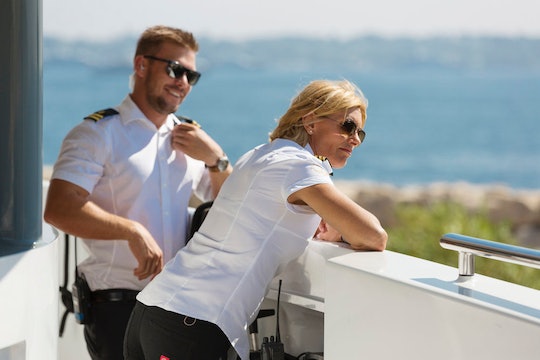 Joao Is Close To The 'Below Deck Med' Cast On Instagram

João Franco has been serving as the bosun of the Sirocco all season on Bravo's Below Deck Mediterranean, but viewers may still feel like there's more to learn about him. His life off the yacht is especially mysterious. When he's not doing his job — or getting in trouble with Capt. Sandy because of his ego — he must fill his time with something. A look at João from Below Deck Med's Instagram could provide some insight into what he does when he's on land.

On João's Instagram, @joaograntfranco, his bio proclaims that he's an official cast member of Below Deck Med as well as a proud Zimbabwean and "WîLd äfRīčAn™ [sic]." He shares a link to an article about him on Bravo's The Daily Dish, where he explains that he knows he can be a "real a-hole," but at least he's real. You're getting the genuine João, for better or worse. There's also a preponderance of videos on João's Instagram, all with the same theme: entreaties to get involved in relief for the Bahamas following the destruction caused by Hurricane Dorian. He thanks his followers for everything they have already done, because for the past several weeks, getting supplies has seemingly been João's chief concern. He wants to make a difference.

When he's not trying to use his platform for a good cause, João enjoys his time off with someone special. There are several pictures of João with a woman who seems to be his girlfriend. She accompanies him regularly on his outings and to events, and his comments on their pictures are generally full of praise. In one, he stated how proud he was of her; in another, they were at the beach together, and he wrote, "There's no such thing as an average day with this lady."

The woman in question is Michelle Dicu. In an interview with the Daily Dish podcast, João spoke about their relationship and how they met. It seems she is involved in the dental profession, because they were introduced when he needed to have his teeth bleached before the reunion. Dicu stepped in for his regular dentist, though it was several months before they'd get together. Now they "spend as much [time] as we can together," though it can be tricky because she lives in New York. However, João explained that he made time to see her as often as he could.

There's also a lot of promo for the show on João's page. He posts weekly reminders to watch the episodes, as well as official promotional shots and pictures snapped on the red carpet. There are some behind the scenes photos, too; next to a group shot of the entire male cast of Below Deck Med, João wrote that it was one of his favorite photos of "the lads." João appears to be close to the rest of the Below Deck Med cast, because they pop up on his Instagram very often.

Everything that matters most to João seems to have a place on his Instagram account: his partner, his job, and his charitable endeavors.