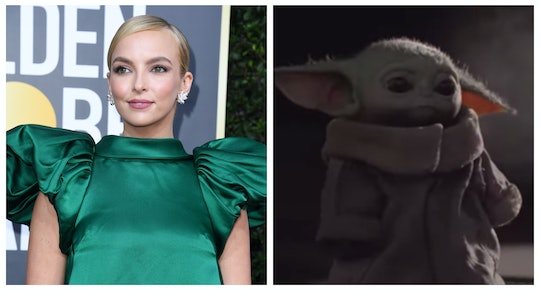 The red carpet ahead of any awards show is our time to drool about one thing and one thing only: fashion. The dresses, the accessories, the messages being sent by certain colors and cuts — it's all so glamorous and mesmerizing and unlike anything that happens in our own closets. True to form, there was no lack of statement-making outfits as celebrities arrived at the Golden Globe Awards, but a few definitely stood out more than others. For example, as plenty of viewers noticed, Jodie Comer's 2020 Golden Globes look delivered ... major ... Baby Yoda vibes.

Comer rocked a loose-fitting emerald green gown, which featured large, puffy sleeves, on the Golden Globes red carpet. And while her bold look certainly turned heads on the red carpet, it also immediately drew comparisons to "the child" from The Mandalorian — aka "Baby Yoda." And before you think, "Hmm, well maybe that's a bit of a stretch," allow me to point you in the direction of a side-by-side shot of Comer and the child, courtesy of Twitter. Because I guarantee once you see the striking similarity, you can't unsee it.

Not long after the actress walked the red carpet on Sunday, a viewer, Erik Anderson, took to Twitter with the genius comparison shot, writing, "Jodie Comer serving Baby Yoda realness."

And that viewer wasn't the only one who detected the strong Baby Yoda vibe. Another person simply tweeted, "Jodie Comer / Baby Yoda."

Yet another Twitter user chimed in with, "Jodie Comer can look like baby yoda all she wants as long as she wins best actress."

Comer was nominated for a Golden Globe in the Best Actress in a Drama TV Series category for her role as Villanelle in Killing Eve. In September, she took home an Emmy for Outstanding Lead Actress in a Drama Series for the same role, prevailing over a slew of amazing actresses — including Emilia Clarke, Viola Davis, Sandra Oh, Laura Linney, Mandy Moore, and Robin Wright.

May the force be with you, Jodie Comer.