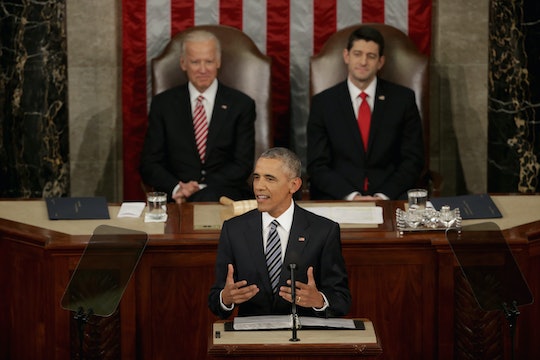 During President Barack Obama's State of the Union address Tuesday night, Vice President Joe Biden mouthed it's "news to me" when Obama said that he's going to help start an initiative to help the U.S. find a cure for cancer. Obama hasn't spoken much on cancer cures before, which is why the sudden mention was so unexpected for everyone — not just for Biden.

Obama said that he was announcing a new effort to cure cancer, which is a pretty big deal, because, well, it's cancer, but also because Biden's son, Beau Biden, died of cancer in May, according to The New York Post. During his speech, Obama described the new initiative, which he said he'd put Biden in charge of, according to Medium:

Last year, Vice President Biden said that with a new moonshot, America can cure cancer. Last month, he worked with this Congress to give scientists at the National Institutes of Health the strongest resources they’ve had in over a decade. Tonight, I’m announcing a new national effort to get it done. And because he’s gone to the mat for all of us, on so many issues over the past forty years, I’m putting Joe in charge of Mission Control. For the loved ones we’ve all lost, for the family we can still save, let’s make America the country that cures cancer once and for all.

When Obama said, "I'm putting Joe in charge of Mission Control," Biden apparently mouthed, "I did not know that. That's news to me," according to a tweet from WRCB News Director Derrall Stalvey.

The moment was both awkward and funny, and Twitter took notice.

Some said that Biden's comment showed that maybe he was "truly touched" by Obama's move, but most people just thought that Biden wasn't taking the whole thing super seriously. In other words, Biden — though he's serious and definitely wasn't joking about the death of his son — was just pulling at typical Biden, calling Obama out on his crap when necessary.

Biden just isn't the kind of guy who can keep a straight face in every situation, and that's totally OK. Biden probably wasn't upset with Obama for springing the cancer initiative on him — he just pulled a typical Biden, "haha" moment, and that's one of the many reasons he's so damn cool.