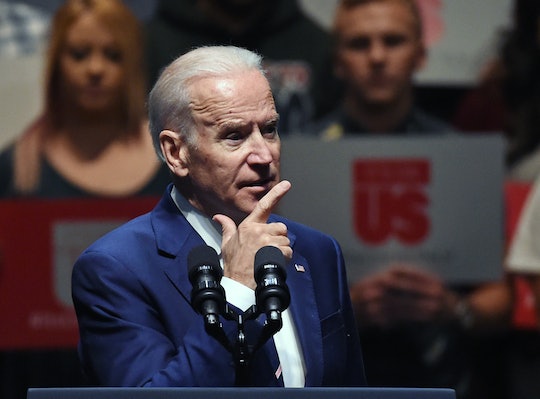 "I do not know your name." That's the refrain Vice President Joe Biden uses in the open letter he wrote to the Stanford sexual assault survivor. He doesn't know her name, but he knows what happened to her. He knows it's not her fault. He knows we all have to do better. Joe Biden's letter to the Stanford sexual assault survivor tells her that he doesn't need to know her name to feel her pain, stand in awe of her courage, and be mad as hell about how deeply she was wronged. In one letter, Biden puts into words all the emotions so many have been feeling since the survivor's story has come to light.

BuzzFeed News just got the letter from Biden titled "An Open Letter to a Courageous Young Woman" and everyone should read, and then re-read, every word. He's responding to her own letter, even quoting her powerful words back to her. He admits she was failed. Failed by so many people. And he vows to do more to make sure other women don't have to suffer the way she did, according to the letter published on BuzzFeed:

I am in awe of your courage for speaking out—for so clearly naming the wrongs that were done to you and so passionately asserting your equal claim to human dignity. And I am filled with furious anger—both that this happened to you and that our culture is still so broken that you were ever put in the position of defending your own worth.

Biden has worked on behalf of women's rights for decades. He championed the 1994 Violence Against Women Act, legislation aimed at bringing rapists to justice and establishing a "rape shield law" to keep a woman's sexual history out of rape trials. But clearly, despite that effort more than 20 years ago, it did little to make a difference in this case.

But Biden vowed to fight on behalf of the woman he calls "... a warrior — with a sold steel spine."

Perfectly said, Mr. Vice President. Most recently, Biden lent his support to the "It's On Us" campaign to educate and stop sexual assault.

In his open letter, he shared everyone's collective admiration for the two Swedish students on bicycles who stopped and intervened, or as Biden wrote, "I do not know your name — but thanks to you I know heroes ride bicycles." He went on to praise them, and encourage others to be more like them and step up and speak out when they see something like this happening.

Biden also doesn't spare Brock Turner's father's comment about "20 minutes of action." He said it was callous, and, while reading his letter, you can practically feel Biden's anger dripping off every word. "You will never be defined by what the defendant’s father callously termed '20 minutes of action,'" Biden wrote. "His son will be."

It felt particularly good to read that part. But turning from his anger, he turns toward the good that will come from this horrible event.

Your words will help people you have never met and never will. And so, I believe you will save lives. I do not know your name — but I will never forget you.

The whole letter is just as powerful, so take the time to read it yourself. And if you're anything like me, it will bring you to tears because it puts into words the emotions I've been feeling since I read the letter she wrote about her brutal experience. It expresses my own admiration of this woman who was willing to speak out about something that happened to her and reclaim it, hoping to get justice. And it perfectly sums up my own gratitude for lifting up every woman who's ever been a victim of sexual assault and was potentially failed by the criminal justice system and maybe even their loved ones.

None of us might ever know her name, but the world will be better for all of us — and our daughters — because of her. And Biden's words are a fitting tribute to her heroism.