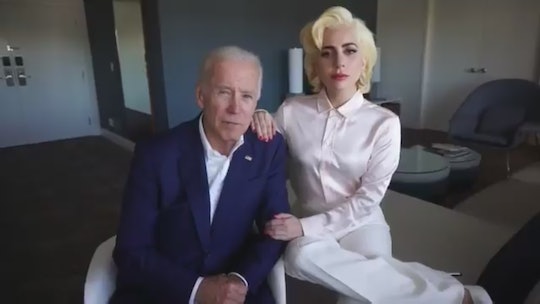 On Wednesday, singer Lady Gaga and former Vice President Joe Biden debuted a public service announcement aimed at helping victims of sexual violence and urging allies to take action in the face of harassment. Released on Lady Gaga’s Twitter account, Joe Biden’s #MeToo video with Lady Gaga comes at a critical time: in the aftermath of (almost daily) public charges that men in positions of power have allegedly harassed or assaulted female colleagues, some have tried to remind us all that men can — and have — been victims, too. But while their PSA doesn’t ignore that men and boys can be victims of sexual violence, it also doesn’t center the male experience. At a time when the national conversation around sexual violence against women or femme-presenting people is gaining real traction, that’s an important distinction.

In the three weeks since a flood of sexual harassment allegations began surrounding film producer Harvey Weinstein, women around the world have come forward to talk about just how depressingly common sexual harassment and sexual assault can be. For example, no one who’s been on Facebook or Twitter in the last month could have missed the global phenomenon of the #MeToo campaign as thousands of women used the hashtag to share their own stories of sexual abuse and assault. And in this new video, created to support the “It’s On Us” campaign launched in 2014 by Biden and former President Obama, Lady Gaga and the former vice president have renewed their call for others to support victims of assault.

(Weinstein's representative hasn't responded to Romper's request for comment, but in a statement to the New York Times earlier this month, the film producer admitted to harassment while denying allegations of assault.)

In the one-minute video, Biden begins by calling Lady Gaga “not only with a great friend, but a fierce advocate” on behalf of victims of sexual assault. He continues:

Lady Gaga has been the voice for people who have been forgotten and people who have been abused ... Well it happened to her. She’s shown enormous courage. And we want to make it real clear. It’s on us, it’s on everyone to intervene -- to stop abuse when they see it and when they hear about it, to intervene. No man has a right to raise a hand to a woman for any reason other than self-defense. Ever. Period.

That’s when Lady Gaga adds, “And that’s not to leave out the men as well.”

And it is. According to the National Sexual Violence Resource Center, one and six boys suffer sexual abuse before reaching adulthood and some one in 71 men will be victims of sexual violence at some point in their lives. And the trauma likely feels familiar on some level to any victim, of any gender.

I am a sexual assault survivor, and I know the effects, the aftermath, the trauma – psychological, physical, mental. It can be terrifying waking up every day feeling unsafe in your own body.

The truth is, women and girls (and those who present as feminine) are still far likely to be victims of sexual violence — one in four girls and one in five women will experience sexual abuse or assault, according to the NSVRC — and campaigns like “It’s On Us” and the hashtag #MeToo have helped to call attention to their experiences as well as the ways that women victims who do come forward are often blamed or silenced.

Without question, sexual violence against men and boys is a serious issue. But there’s a difference between erasing male survivors and centering them.

With their PSA, Lady Gaga and former Vice President Biden are helping to keep our collective focus on what we can do to support victims and end rape culture. It’s an essential conversation to have, and one that should include remembering that men and boys can be victims, too. But it’s important that we acknowledge that experience without changing the subject.

If we’ve finally arrived at a time when women can talk about sexual violence and feel safe coming forward with their stories — if we’ve finally come to a time when men will be held accountable when they act in ways that are predatory — the last thing that women need is a reminder that #AllLivesMatter. Trust me, that point has never been in serious doubt.