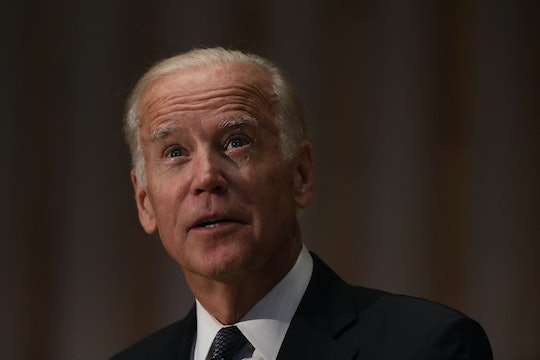 The Republican fight to repeal and replace the Affordable Care Act (ACA) — and the Democrats' fervent effort to save it — has been raging for much of Donald Trump's presidency. Now, Senate Majority Leader Mitch McConnell and other conservative leaders are working to amass the votes to do just that by passing its proposed overhaul the ACA. But the vote to begin debate has been unexpectedly delayed, giving both Republican ultraconservatives and moderates more time to consider the bill and its projected implications — and for progressives to try to convince them to oppose the bill. So, former Vice President Joe Biden's op-ed about the ACA is a must-read for both undecided senators and for Americans still working out where they stand on the issue.

Biden was right by President Barack Obama's side throughout the effort to craft and implement the ACA, which ultimately passed in 2010. And, in his new opinion piece in The Washington Post published Monday, he insists that the crowning achievement of the now-law is that it drives home the point "that health care is a right for all and not a privilege for the few." The Senate's current attempt to dismantle it, he argues, is a direct rebuke of that principle that will have devastating effects on millions of Americans and denigrate society as a whole.

McConnell had planned to start the process of bringing the bill to a vote this week, but abruptly postponed the proceedings Saturday when Arizona Republican Sen. John McCain announced that he needed time to recover from a surgery to remove a blood clot and would not be immediately present. In order to pass, the bill must garner the support of at least 50 of the 52 Senate Republicans, plus secure the tie-breaking vote of Vice President Mike Pence. Two Republican have already announced their opposition — meaning that McCain's "yes" vote is crucial. There's no guarantee that that he will vote yes, however, and CNN reported that as many as 12 Senate Republicans are still undecided.

For Biden, the path forward for those Senators should be clear. "In my 36 years as a senator, I saw my colleagues take plenty of hard votes," he wrote in the op-ed. "This just isn’t one of them." That's because, he argues, the new bill would slash Medicaid funding by $772 billion, attempt to address the dire opioid epidemic gripping the nation "on the cheap," and "guts the ACA’s promise that care like maternity and mental health and substance-use disorder services must be part of any viable health coverage system."

It would also permit insurers to sell skimpier plans to young and healthy people. But people who required more medical care would have to buy the more expensive plans that covered their needs — or be forced to go without if they couldn't afford the inevitable resulting dramatic spike in premiums, Biden wrote. In a letter to the Senate Friday, the influential health insurance companies America’s Health Insurance Plans and the Blue Cross Blue Shield Association warned of the same probable outcome that such a segmented market would make insurance unaffordable for many with pre-existing conditions, Vox reported.

In short, Biden argues in the Post, the ACA afforded Americans peace of mind that they would be able to afford care even if they got sick. He concedes that the ACA has its own flaws, and implores his former colleagues in the Senate to proceed in good faith in the quest to remedy those:

If Republican leadership wants to improve the ACA, let’s first come to an agreement that everyone should have health coverage. Then, based on that premise, let’s have a debate about how best to improve care and reduce costs. Let’s again make the commitment that in America, health care is a right for all, not a privilege for the wealthy.

It's Biden who was spurred to speak this time, but Obama himself has condemned the Republican attempt to repeal the ACA, too. When the Senate unveiled an earlier version of the bill last month, he blasted it as a "transfer of wealth from middle-class and poor families to the richest people in America" in a Facebook post. Indeed, that bill, the Better Care Reconciliation Act, would have dramatically cut taxes on the wealthy at the expense of causing more than 20 million people to lose their health insurance, Biden noted.

I recognize that repealing and replacing the Affordable Care Act has become a core tenet of the Republican Party. Still, I hope that our Senators, many of whom I know well, step back and measure what's really at stake, and consider that the rationale for action, on health care or any other issue, must be something more than simply undoing something that Democrats did.

Biden is requesting the same: For senators to put Americans' health and wellbeing first.