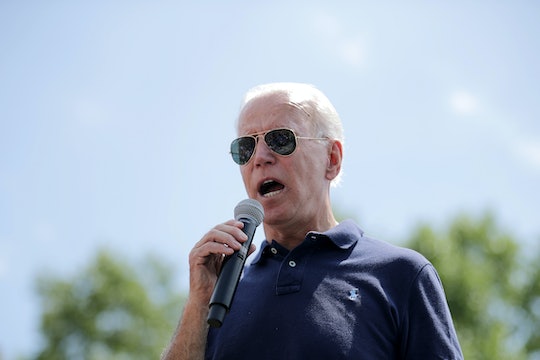 Every so often, I'll hear a politician say something that makes me wonder, What? Did they seriously just say that? Am I being Punk'd? And the beginnings of the 2020 presidential election are thick with Punk'd moments. Like when former vice president Joe Biden attempted to inspire the Iowa Asian and Latino Coalition at an event on August 8, telling them, "We have this notion that somehow if you’re poor you cannot do it. Poor kids are just as bright and just as talented as white kids," per the Des Moines Register. The comments came while he discussed his plans to increase investment in lower-income schools, and immediately had a qualification tacked on: "Wealthy kids," he added, "Black kids. Asian kids. No, I really mean it. But think how we think about it." If given a shot, he said, poor kids can do "anything anybody else can do."

But it was too late. Everyone there heard him: "Poor kids are just as bright and just as talented as white kids."

What? Did they seriously just say that? Am I being Punk'd?

Biden's real-time attempt at a backtrack couldn't mask his initial comment, a comment rooted in the idea that race and class are inextricably linked: that white kids are at the top of the intellectual heap, even if, charitably, he felt that other kids belonged there too.

It is an issue that Toni Morrison addressed in the introductory chapter of Race-ing Justice, En-gendering Power: Essays on Anita Hill, Clarence Thomas, and the Construction of Social Reality. Before critiquing politicians who uphold the idea of "racelessness," the notion that it is possible to transcend race due to some sort of post-racial paradigm shift in society, Morrison explained that "because race and class — that is, black equals poor — is an equation that functions usefully if unexamined, it is possible to advance exclusionary and elitist programs by the careful use of race as class."

When Biden remarked that poor kids are just as bright as white kids, he unwittingly alluded to the "equation" explained by Morrison. Yes, he was speaking to an audience of Hispanic and Asian voters, i.e., nonwhite voters, and his intention was, most likely, to gain support for his education plan, which seeks to eliminate the $23 billion annual funding gap between white and non-white districts by tripling funding for schools that primarily serve underserved students, according to this official campaign website. But by placing poor kids and and white kids on opposite ends of a hypothetical achievement and talent spectrum, he offered insight into how his implicit biases impact his ideas about race and class. Romper reached out to the Biden Campaign Team for clarity on his intentions, but did not hear back at the time of publication.

Biden is right that a funding gap does negatively impact schools in Black and Latinx communities. There are nationwide "disparities in wealth [that] can create fundamental inequities in school funding between high-poverty and low-poverty districts," per the authors of Public Education Funding Equity: In an Era of Increasing Concentration of Poverty and Resegregation, a report recently published by the U.S. Committee On Civil Rights. Further, "over the past three decades, wealth disparities have increased and poverty has become more concentrated in certain areas, disproportionately affecting racial and ethnic minorities."

Since those wealth disparities are often a direct result of structural and institutional racism and inequity that disproportionately impact non-white people, it's important for policy makers to address the systemic root causes of the disparities.

So, if Biden plans to use federal policymaking as a way to successfully increase equal educational opportunity, he should avoid conflating race and income levels, since the achievement gap for poor and rich children is in fact larger than the black-white achievement gap, per a Stanford researcher.

Biden's comments are a great point of departure for conversations about why we use phrases like "low-income" instead of "underserved" to describe communities that lack vital resources.

Back in 2007, Biden was critiqued for comments he made that recently re-circulated in the media, about Iowa students outperforming students in Washington D.C. "There's less than 1% of the population of Iowa that is African American," he said, before he went on to add that "there is probably less than 4 or 5% of that are minorities. What is in Washington? So look, it goes back to what you start off with, what you're dealing with” — comments interpreted at the time as suggesting that high levels of minority students bring down test performance.

Apparently, 12 years isn't enough time to unlearn toxic ideas about race and class. Partly to blame for Biden's latest gaffe is the fact that implicit biases "[set] people up to overgeneralize, sometimes leading to discrimination even when people feel they are being fair," as reported in Scientific American. The authors of How to Think about "Implicit Bias" state that "many of us are more biased than we realize," and insist that "that is an important cause of injustice — whether you know it or not."

While implicit bias is an important cause of injustice it also, as Morrison explained, "functions usefully if unexamined." That is why it is important to unpack Biden's comments, and comments made by other politicians purporting to be our representatives, in an effort to better understand how we form our beliefs and how those beliefs can impact what we do. When it comes to politicians, and other people in positions of power who have the authority to make decisions that will impact billions of lives, the projects of community-building and human progress depend on addressing and correcting discriminatory ideas that can be transformed into policy.

Biden's comments are a great point of departure for conversations about why we use phrases like "low-income" instead of "underserved" to describe communities that lack vital resources. They also present an opportunity to question our own ideas about race and class, especially with respect to how implicit biases creep into our daily lives. For Biden, the evidence of how implicit bias impacts our daily lives is in his countless speeches, and it's up to him to do the work to unlearn his racist ideas. In the meantime, it's up to us to do the work of examining how we think about race and class.