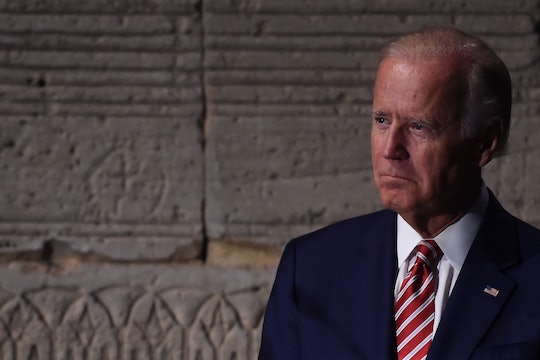 At an event with military veterans on Monday, presidential nominee Donald Trump attempted to appeal to his audience by talking about the intensity of enduring combat experiences — something he himself has never experienced — and in the process, greatly offended some veterans. After the comments were made, Vice President Joe Biden responded to Trump's PTSD comment while campaigning for Hillary Clinton in Florida.

At a campaign event with the Retired American Warriors PAC in Virginia on Monday, Trump made the following statement about those who have seen combat while serving in the Armed Forces:

When people come back from war and combat and they see maybe what the people in this room have seen many times over, and you're strong and you can handle it, but a lot of people can't handle it.

Trump's implication that veterans who struggle after enduring combat — either with Post Traumatic Stress Disorder or depression, which may ultimately lead them to be homeless or take their own lives — are not as strong as those who didn't show how dangerously little he understands about the issue, and what a complete lack of empathy he has.

In his response from the campaign trail, Biden read the comment and then paused, seemingly mystified by the words he'd read. When his reaction got a rustling from the crowd, he urged them to listen as he told a story about his late son, Beau and his own experiences traveling in the Middle East while serving as vice president:

Where in the hell is he [Trump] from? No, no, no — this is deadly earnest. My son spent a year in Iraq, came back a highly decorated veteran — bronze star and a lot else. I've been in and out of Iraq and Afghanistan over 29 times.

On one trip he made as vice president, Biden was asked to present a silver star pin to a young solider who had risked his life to save a fellow soldier from a burning Humvee:

Biden continued his passionate speech by talking about how each day, he gets reports from the Department of Defense that tell him not just the number of military personnel killed in combat, but the lost and wounded as well. "Every one of those warriors left behind an entire family, a community — for us," he said, showing a copy of his daily schedule, which included those daily numbers.

The one number he doesn't want us to forget is the more than 200,000 soldiers "coming home with unseen wounds" — those who have debilitating, at times life-threatening, mental illness that is a direct result of the horrors experienced in combat.

"I don't think he was trying to be mean," Biden said of Trump, "But he is just so thoroughly, completely, uninformed."

Biden ended his passionate speech by saying he makes no apologies for calling the nation's responsibility for caring for those who serve "sacred" — and that the "sacred obligation" remains once the soldiers return home to their families.

It's been reported by the U.S. Department of Veterans Affairs that based on available data, approximately 20 veterans commit suicide each day in the United States.