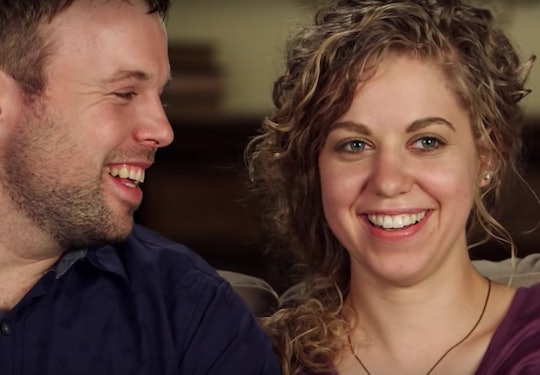 Less than a year after getting married, John David and Abbie Duggar are expecting a child. The couple have confirmed to People that they're pregnant with their first child together after a photograph posted to social media sparked pregnancy speculation among Counting On fans.

"We are on Cloud 9 about welcoming our own little Duggar into the world," the couple told People in a statement on Thursday. "It really is amazing to think about being parents and having our own child to raise." The couple went on to say they were "thankful that God has blessed us with this new life," adding that they "look forward to taking on this new adventure," People reported.

In a video shared by TLC, the couple explained that they'd been surprised to learn about the pregnancy during a recent trip to urgent care. "We went to the urgent care because I was feeling a little under the weather," Abbie said, adding that the staff there had performed a pregnancy test as part of their standard care. "[An urgent care staffer] said, 'oh, and by the way, we always do a pregnancy test and yours came back positive,'" she said. The new mother-to-be revealed she'd cried "from excitement and shock" upon hearing the news.

"This is not the way she'd planned to find out," John David said. "But we're so happy."

According to TLC, the couple celebrated their baby news with an airplane themed photoshoot. Photographs shared by the television network showed the couple posing in an airplane with a "Baby on Board" sticker and holding up a onesie featuring a plane and the phrase "Baby Passenger on Board." In another series of photographs, the couple are posed near a sign that reads, "We're expecting a co-pilot!"

Fans had begun to wonder if Abbie was pregnant earlier this week after the couple shared a photograph of themselves on their Instagram account, in which they both appeared to have their hands resting on Abbie's stomach. "Are you guys pregnant?" one fan asked. Another commented that the couple, who married in November, was "posing like there is a baby in there," while a third said they thought the post was going to be a pregnancy announcement by the look of the picture.

The couple shared their speculations about the baby's gender in the video posted by TLC. While Abbie said that she'd been guessing it will be a girl, John David revealed that he'd recently had a change of mind. "I've been thinking girl for a long time, but I also kind of think it could be a boy," he said. "I'm kind of telling myself it's going to be a boy."

Whatever the baby's gender actually does end up being, the Duggar couple appear to be nothing short of delighted about the prospect of becoming parents. "I'm really looking forward to having a little one around," John David said in the video. "I mean, I'm really just thrilled and just excited for the next step in our little family's life as we expand."