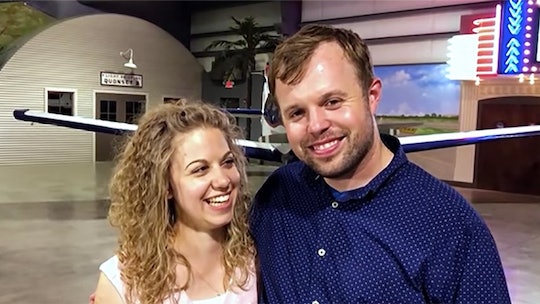 Well, it's safe to say that John David Duggar's "bachelor 'til the rapture" days are history. Fans of TLC's Counting On already know he tied the knot with Abbie Burnett earlier this month. But considering the series is currently on a break, viewers still haven't had the chance to catch many details about the grand affair. That is, until today. And guys, John David Duggar and Abbie Burnett's wedding kiss is the most romantic thing you'll see all day.

On Tuesday, Nov. 20, the early premiere of John David and Abbie's wedding special dropped on TLC GO, Us Weekly reported. (Typically, a longer version airs on TLC at a later date.) The 20-minute special details the couple's whirlwind romance — which began at the same Ada, Oklahoma church at which they were married. "We met on a Sunday morning at a church that my parents were speaking at, and it was pretty much love at first sight," Duggar, 28, explained. "Although, we didn't realize it was love at that moment. We just.... not infatuation, that's not the right word."

"I'm pretty sure you were infatuated," Abbie, 26, interjected.

"Yeah, I was kind of infatuated," John David admitted with a smile. "But like, curiosity out the roof."

"I was very intrigued," Abbie added.

The rest is history. Duggar and Burnett started texting each other, and didn't stop. "And so about a week later, I asked her to court me," Duggar said. Nearly two months after they started courting, the lovebirds became engaged. And as People reported, they tied the knot on Nov. 3.

Although I highly encourage Counting On fans to watch the 20-minute wedding special for themselves — because John David and Abbie are clearly so in love, I can hardly stand it — I can't help but bring up "the kiss." Per Duggar tradition, John David and Abbie decided to wait until after they said their vows in order to share their first kiss. And clearly, it was well worth the wait. After the officiator declares, "You may now kiss the bride," John David then proceeded to kiss each of Abbie's hands, each of her shoulders, her cheek, her forehead, her other cheek — and then finally came "the kiss."

Seriously, it was pretty much the sweetest thing ever. And judging by the Facebook comments, I'm not alone in thinking so. One Facebook user wrote, "That was the utmost romantic wedding kiss I've ever seen! Abbie is a lucky girl 😘."

Another person commented, "I have watched all the Duggar weddings and have loved each and every one of them. But this was the sweetest wedding and you can see the love they share. I am just squalling. Congratulations and Best Wishes John David and Abbie!"

Yet another person chimed in with, "Well this Duggar wedding was a first!! John-David kissing Abbie all over the place before the real kiss!! This is my favorite Duggar wedding of all time!!"

Another Facebook user wrote, "Omgosh! 😭😭😭 John is an absolute sweetheart! I love how he kissed her everywhere before the actual kiss! ❤️❤️."

In a post-wedding interview clip by TLC, the newlyweds took a moment to reflect on their big day. And it seems this kiss left a big impression on the blushing bride, InTouch Weekly reported. “Two of my favorite moments was the opening song, just welcoming in God’s presence, and John’s tender kiss at the end,” Abbie said.

I don't know about you, but John David and Abbie are my new favorite Duggar couple. (Jinger and Jeremy Vuolo are still a close second, though.) Maybe it's because they got married "later in life" in comparison to the rest of the Duggar siblings so far. Maybe it's that Abbie is gainfully employed outside of the home (unlike any other Duggar sister or wife) as a registered nurse. Or maybe they really are "meant" for each other. But I can't wait to see how their relationship evolves on Counting On now that they're hitched!