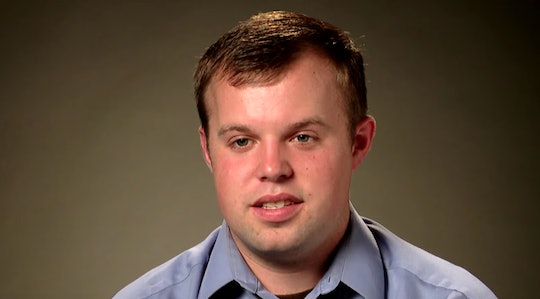 John-David Duggar Is Now On Instagram, Thanks To His New Relationship

These days, it seems as if the Duggar family is full of announcements — probably because with 19 kids, there is bound to be multiple exciting things happening in their lives. And on Tuesday, the Duggar family made one very important announcement — 28-year-old John-David Duggar officially entered a courtship with Abbie Grace Burnett. Now that their courtship has been made public, this means that John-David Duggar is now on Instagram, where fans can hopefully follow any updates and news about his relationship with his special lady.

In an interview with Us Weekly, Duggar said that he is "in love" (ooooh) with Burnett, a native of Oklahoma who he made a connection with at a church event. "Abbie and I are just so excited, we've known each other for several years," Duggar said, according to Us Weekly. "We fell in love quickly and it's been a wonderful journey thus far."

But fans know that in the Duggar household, a courtship — which Jim Bob Duggar defines as "dating with a purpose," according to TODAY — comes with a lot of rules and some privileges. One of these privileges is being able to have their own Instagram account once they enter a courtship or get married, according to In Touch Weekly. And John-David finally got his own shared account with Burnett on Tuesday.

Their handle — @johnandabbie — is a simple and effective way for fans to find them and be updated about their courtship. And you know it's legit since his sisters — Jinger Vuolo and Joy-Anna Forsyth — are following the account. What's more, the first post to the Instagram account is also pretty amazing.

In the post, Duggar fans are able to see a photo of John-David and Burnett that they had never seen before. This is incredibly special, since without social media or the Duggar family reality show, Counting On, on air at the moment, fans haven't been able to keep up with John-David and his new relationship. But what makes the post even better is the caption, which is a playful nod to John-David's younger siblings getting married before him.

"So I reconsidered the whole 'bachelor to the rapture' thing," John-David captioned the photo.

It's a good thing he "reconsidered" that because Burnett is quite the catch. Burnett is not only around John-David's age (she's 26, according to TLC), but she also has an established job as a nurse, according to TLC. And judging by the way that John-David looks at Burnett, as seen in a video shared to the Duggar family blog on Tuesday, you can tell that he is so in love.

John-David's relationship status had become a hot topic among fans — especially when his younger siblings were getting married while he and his twin sister, Jana Duggar remained single, according to In Touch Weekly. The fact that John-David is the second oldest Duggar child, in a family of 19, didn't make his life as a single man any easier. In 2014, Jana told People that she was waiting for her time to enter a courtship. "I just think for me I am just waiting and we'll see," Jana said. "When God brings that one along it will be his timing."

John-David had similar thoughts about finding the right person for him and starting a courtship. During an interview with TLC in 2016, John-David revealed that he wanted a family, but had to pray about it and wait for his time. John-David said:

Future plans would be to, I think, one day, the Lord will bring the right one along and then I'll start a family. And hopefully, be able to invest in their lives, and raise up a generation that will be great people for this society. And really just be a good solid family. A big happy family.

Although John-David wasn't seeing someone at the time, he did reveal that he was praying for that right person to come along. "One day, it will happen," John-David said, according to TLC.

The praying paid off — it's clear that John-David is so happy to be in a courtship with Burnett. Now that the couple is on Instagram, hopefully this means a lot more photos, jokes, and updates from them.