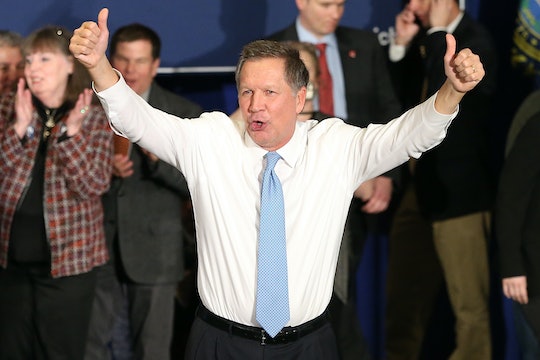 Ohio Gov. John Kasich is framing his run for president as the moderate choice among a group of candidates out to prove they're the hardest liner of the bunch. So it makes perfect sense that, in comparison, the softer spoken and less-radical sounding Kasich might seem like a sensible choice in comparison to the fervently Evangelical Sen. Ted Cruz, the anti-choice (even in the case of rape and incest) Sen. Marco Rubio, and the completely unhinged Donald Trump. But the truth is, Kasich isn't as moderate as you think he is. In fact, women might want to be downright scared of Kasich, who's willing to pose as the reasonable candidate, but in the meantime is making policy and statements that are a complete affront to women and the issues that most impact their lives.

Let's take his latest move in Ohio. In the midst of his "aw-shucks," Dad-for-all-seasons shtick on the campaign trail, on Sunday, Kasich still found time to sign a bill that strips Ohio's Planned Parenthood of more than $1 million in state funding that was being used to provide care for pregnant mothers and newborns, HIV and STD testing, programs to combat domestic violence, and other basic healthcare services for women. Kasich no doubt wants to project a no-nonsense support of anti-abortionists, regardless of the fact that federal funds are banned from being used for abortions. The effect of the legislation, which didn't name Planned Parenthood directly, was to ban state funds from going to any organization that provides abortion services.

In addition to telling one young student voter on the campaign trail who wanted to ask a question that he didn't have any "Taylor Swift" tickets, on Monday he let a doozy of a sexist comment fly without even seeming to recognize that what he was saying could be offensive. He told the Virginia crowd gathered for his stump speech that, in the '70s, women "left their kitchens" to campaign for his bid for Ohio State Senate.

Even though the comment was crap, what came next should be enough to fill every woman with hope. A young woman spoke up and said she was a nursing student, and then she responded to Kasich's absurd comment: "I'll come support you, but I won't be coming out of the kitchen." The retort sparked audible cheers from the crowd.

Kasich has made several comments that should cause women to pause, including saying he wants to "spank" both Britney Spears and Lindsay Lohan — two grown ass women — for what he perceived as inappropriate behavior while he was working as a Fox News host.

It's getting too easy to lose touch with reality in light of an election season fueled by what would have amounted to disqualifying hate speech for a presidential candidate just a couple of years ago. But ladies (and gentlemen who care about women's rights), let's not get it twisted. Just because Kasich isn't full-on foaming at the mouth and promising to ban Muslims from entering the U.S. doesn't make him moderate. It just makes him slightly less offensive than the competition. Is that good enough to earn women's votes? I seriously hope not.