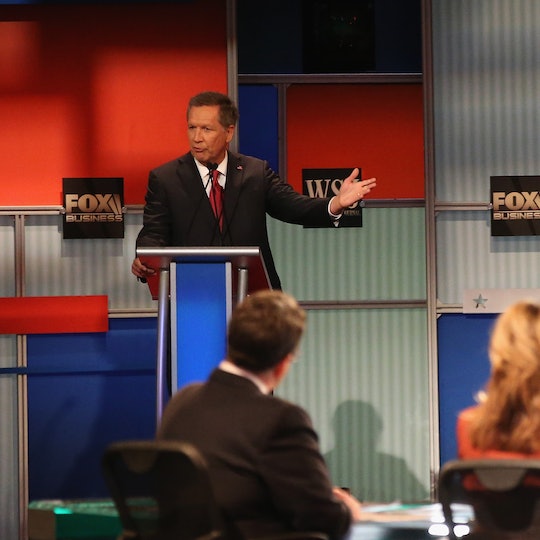 Oh, GOP Debate. You're the comedic relief I've been waiting for. I do love you and don't worry, I'm aware it's not a healthy relationship, and yes, I know I should be running the other direction. But can you really blame me? GOP presidential candidate Donald Trump is the gift that keeps on giving, and tonight, he went after John Kasich. Kasich fired back at Trump's wall plan between the United States and Mexico, saying the things that, you know, every other person on the planet has been thinking, and The Donald didn't like it very much.

Watching the two of them on stage is like watching two adorably silly puppies try to play together, if one of those puppies was behaving like an adult with valid opinions and the ability to exercise manners, and the other one was behaving like, well, a man who puts his name in gold and mounts it on ugly buildings.

Talking about his plan for the wall, Trump said:

That's the moment when Kasich fired back:

Well look, in 1986 Ronald Reagan basically said the people who were here, if they were law-abiding, they could stay. What didn’t happen is we didn’t build the wall effectively and we didn’t control the border. We need to we need to control our border just like people control who goes in and out of their house. But if people think we are going to ship 11 million people who are law-abiding and who are in this country and somehow pick them up at their house and ship them off to Mexico. Think of the families, think of the children.

So the answer is: If they’ve been law-abiding, they can stay. We protect the wall. But for the 11 million people? Come on, folks! Ee all know you can’t pick them up and ship them back across the border. It’s a silly argument.

Thanks, Kasich, for saying what we all feel.

Here's the exchange, in case you missed it: