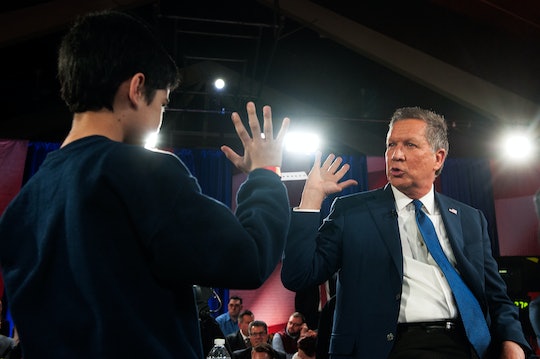 Well, this just got awkward. On Tuesday, Ohio Gov. John Kasich lost yet another primary, coming in a distant third behind billionaire Donald Trump and Texas Sen. Ted Cruz. After Tuesday's loss, Kasich reassured supporters via a Facebook post that his campaign plans remained unchanged. On Wednesday, Kasich got in on the #MayThe4thBeWithYou hype. John Kasich's #StarWarsDay tweet featured a 90-second video riffing on the notion that Kasich is "Our Only Hope" to beat former Secretary of State Hillary Clinton in November. Three hours later, word leaked that Kasich will suspend his presidential campaign in a press conference at 5 p.m. Eastern Time. I genuinely cannot cringe hard enough right now.

In classic Star Wars fashion, the video opened with scrolling yellow words across a star field backed by John Williams's iconic theme. The text brought viewers up to speed with the lay of the land: In this case, the imagined scenario of Clinton winning the presidential election in November and "preparing to name her newest Supreme Court Justice Elizabeth Warren." It only gets more ridiculous from there, invoking every GOP talking point from new tax hikes to Second Amendment restrictions. Oh how I wish I were making this up, but it's all there in one gloriously awkward video:

Aside from this being a classic case of "older person tries to relate to the youth vote with hip/slightly-over-produced social media content" — see other such notable recent examples as Clinton's "abuela" gaffe and 15 plus hours of unused Cruz campaign ad footage on YouTube — this whole social media endeavor is just that much more awkward to watch given Kasich's impending campaign suspension.

Given the timing, it would seem as though Kasich's #StarWarsDay video was produced well in advance of May 4. There's even a very good chance that not only was the video was created weeks ago, but that the tweet itself was scheduled for posting weeks in advance — well before anyone on his campaign had any inkling that Kasich would drop out before the Republican National Convention in July. And even if his campaign's social media team did know about Wednesday's forthcoming campaign suspension, it probably would have been posted anyway given that the funds to create the video have likely already been spent.

But that timing — yikes. Super awkward all around. A moment of "Do or do not, there is no try," as the Jedi master Yoda might say.

Like so many failed GOP campaigns this year, Kasich's #StarWarsDay video is yet another strange relic of this absurd primary season.