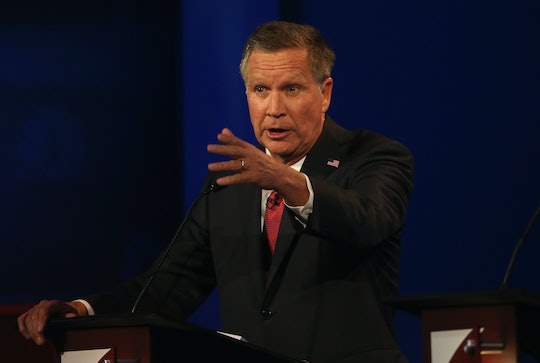 John Kasich's Website Was Down During The Republican Debate, Which Was Pretty Much The Worst Possible Time

As one of the lowest-polling candidates in a crowded field, Ohio governor John Kasich is desperately trying to get some momentum in the race for the GOP presidential nomination. In an attempt to make that happen at the fourth GOP debate tonight, the governor used one of the few moments with the floor all to himself to promote his campaign website. Only Governor Kasich’s website was down at the time. Major whoops.

Kasich’s appeal for people to go to his website came after he had just gotten started outlining his plan for the economy. With his allotted time running out, he quickly squeezed in a plea for people can check out his full plan on JohnKasich.com. Cool plan! One problem: When viewers went there at the time, they were greeted by an error message instead of more details about what Kasich would actually do for the economy. That was seriously bad news for the governor, who, with roughly 3 percent of potential Republican primary voters saying they would support Kasich, was one of the lowest-polling candidates on the stage. (Actually, it was an accomplishment that Kasich even made the cut for the main stage at the Fox Business-run debate.)

Although Kasich’s website was back up soon enough with plenty of time to go in the debate and time to spar with Donald Trump, people commenting on social media weren’t about to let the error go unnoticed.

Kasich’s web people earned their pay when they got it back up within minutes, at which point people who were still interested were able to learn about Kasich’s plans for the economy. (Spoiler: They involve “putting conservative budget policies to work.”) But the Internet never forgets — even when it is down on some sites.