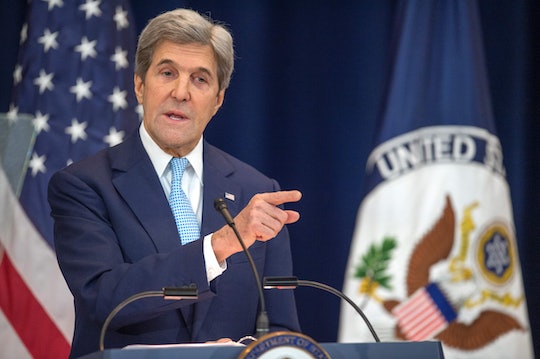 On Wednesday, U.S. Secretary of State John Kerry delivered remarks for more than 70 minutes, following the controversial decision by the United States to abstain from a key U.N. Security Council vote on a new Israeli-Palestinian conflict resolution last Friday. John Kerry's Israel statement filled in the silence left by the U.S. abstaining from the vote on the U.N. resolution, and made clear in no uncertain terms that the path to moving forward with a "two-state solution" is in "serious jeopardy." Wednesday's remarks by Kerry were uncharacteristically critical of Israel, further adding to the criticism in absentia when the United States abstained from Friday's U.N. Security Council vote. The U.N. resolution offered one of its harshest criticisms of Israeli settlements in the West Bank yet.

Israeli Prime Minister Benjamin Netanyahu responded to Kerry's speech with harsh words of his own, expressing "profound disagreement we have had with the Obama administration." In the same vein, Netanyahu praised President-elect Donald Trump's incoming administration to "mitigate the damage this resolution has done and ultimately to repeal it." Kerry's remarks come after eight years of the Obama administration's fraught and at times seemingly crumbling relationship between the United States and Israel, especially following Kerry's failed Israel peace talks in 2014.

Since 2009, a Middle East "two-state solution" has been the official Obama administration policy regarding Israel and the West Bank, much to Netanyahu's chagrin. After Obama's speech in Cairo in June 2009, Netanyahu agreed to a two-state solution, the Israeli Prime Minister faced backlash from his own supporters — many of whom are West Bank settlers and who are not in favor of a two-state solution. In Kerry's speech, he blasted Israel for its continuing settlement expansion across the West Bank — a much more vocal outcry that abstaining from the U.N. resolution vote last week. The U.N. resolution, which was largely ceremonial, demanded that Israel end its practice of building settlements in the West Bank, which many argue is Palestinian land.

Looking at just maps alone — and removing everything from the Israeli-Palestinian conflict including politics and religion — it's easy to see why Israeli settlements might be stopping to a two-state solution.

Prior to Kerry's remarks, Trump took to Twitter to share some of his signature 140-character take on foreign affairs. Representatives for Trump did not immediately return Romper's request for comment.

Kerry acknowledged that the next U.S. administration plans to take a different path toward resolution in the Middle East, adding, "That is for them to decide." But Kerry reaffirmed the Obama Administration's last chance to make whatever stand it can on Israel with so few days left in its own administration: "But we cannot in good conscience do nothing and say nothing when we see the hope of peace slipping away."