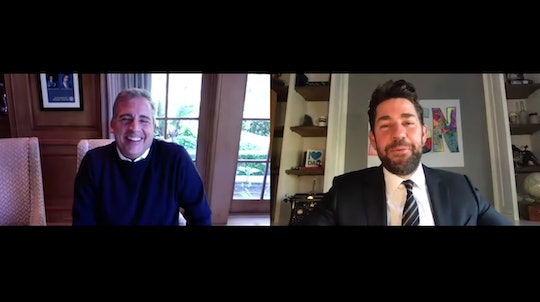 Celebrities are just like us. And by that I mean, they too are bored and cooped up at home. In an effort to alleviate some of that boredom and bring people a bit of fun and positivity, John Krasinski interviewed Steve Carell for a YouTube series the Jack Ryan star started. While practicing good social distancing, the two actors reunited over video chat to celebrate the 15th anniversary of The Office.

"So, Steve, this week marked a huge anniversary for you and I," Krasinski said. "We were on a little show called The Office and it turned 15 years old this week."

While fans of The Office view the mockumentary sitcom to be something of a classic, Krasinski told Carell he initially didn't have a lot of faith in the show. "I was a waiter when I got that job, I was 23 years old," Krasinski said. "After the pilot, I went back to waiting tables because I was sure nothing was going to happen with it."

But it seems Krasinski wasn't alone in thinking nothing would come from The Office pilot. "We all kind of came into it with that vibe," he said. "I remember none of us had done anything huge."

Laughing from his own home in Los Angeles, California, Carell called the success of The Office a surprise. "It's such a happy surprise that after all these years people are still tuning in and finding it even today," he said. "It's pretty cool."

The pair then went on to discuss their top memories from filming with Carell revealing his favorites included the cast's exchanges around Michael Scott's purchase of a teeny-tiny, wall-mounted flat screen TV in the episode entitled "Dinner Party" from Season 4. Krasinski then shared an outtake from that episode, featuring himself, Carell, Jenna Fischer, and Melora Hardin cracking up during filming after Carell demonstrates how the TV can be moved roughly an inch away from the wall.

"I think most of the memories have to do with things that we shared as a cast," Carell said. "Part of what was so much fun about it is that everybody in the cast was rooting for everybody else. People would step back when it was time for other people to shine and celebrate." The actor then pointed to Krasinski's impersonation of Rainn Wilson's character Dwight Schrute in the episode "Product Recall" as an instance where Krasinski's acting skills truly shined.

The two then shared how emotionally-charged their final scene together, in which Krasinski's character, Jim Halpert, bids Carell's character goodbye, had been, with Krasinski calling it, "the most emotional I've ever been on a set."

"Some of my most fun memories, personally or professionally, are intertwined and connected with that show," Carell said.

But what of fans' repeated calls for an Office reunion? "Listen, I know everyone's talking about a reunion, hopefully one day, we just get to reunite as people and just all get to say, hi," Krasinksi said in reference to public health officials recent recommendations for social distancing during the ongoing coronavirus pandemic.

Krasinksi launched his new YouTube series, Some Good News, Sunday after lamenting about the need for a news show dedicated entirely to good news. While Krasinksi hasn't announced a prospective date for a second episode of Some Good News, he did end Sunday's show by telling viewers he "just might do this again." Fingers crossed.