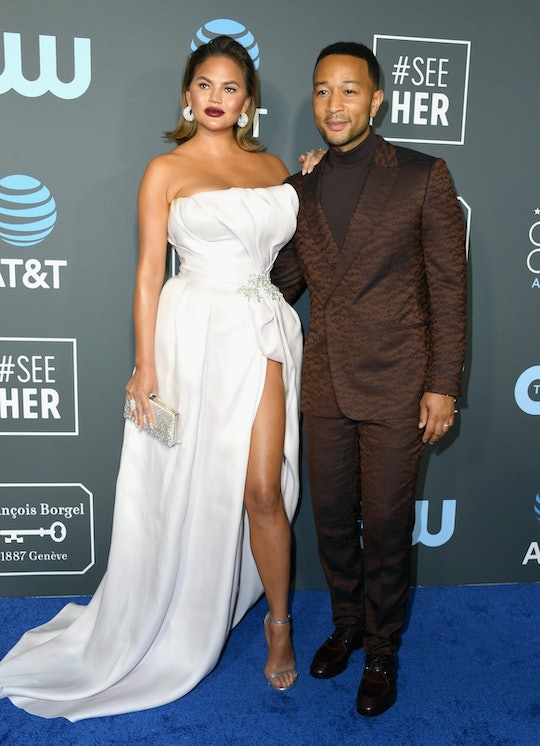 Ah, Chrissy and John. Though there are so many moments that make us sigh and think Teigen couldn't be more transparent if she tried (hey, she's just honest about being human, and so few celebs are, so it's refreshing). Then there comes a spectacular interview like this one, which reminds us all that every couple is pretty much the same. John Legend and Chrissy Teigen got in a massive fight at Kanye West and Kim Kardashian's wedding, and can't even remember why it started, pretty much just like the rest of us.

During an appearance on Watch What Happens Live, the couple opened up about the fact that they got into a big argument during the couple's 2014 wedding in Italy.

“I don’t remember what it was about,” Legend said. “We try to think about this all the time,” added Teigen. “I think I was really intimidated and I think I came from a lot of insecurity and I took it out on John… There was a lot of fabulous, amazing people in one room… that’s where it stemmed from.”

Teigen continued: “I was just very insecure — I think that’s where it stemmed from. And then it just, you know how things snowball into a bigger thing. And also drinking, so that doesn’t help.”

Regardless, Teigen went onto say that she feels bad that it all went down during their friend's special day, and that she often feels compelled to keep apologizing to them.

Honestly, we've all been there. It's so normal for couples to get into arguments seemingly over nothing, and why does it always seem to happen on the most important nights? Aside from being friends with Kardashian and West, Legend also famously sang "All Of Me" for their first dance together, Billboard reported. On New Year's Eve of 2018, he and Teigen attended another KarJenner party, and sang it once more, which Kardashian noted was the first time she and her husband got to dance to it while Legend sang it live since their wedding night, MSN reported.

This is actually not the first time that Teigen has opened up about her arguments with Legend.

Earlier last year, People reported that Teigen said she had a "meltdown" out of "jealousy" when Legend was working on filming the video for "Green Light," one of his most popular songs. It all stems from the fact that the couple originally met on another music video of his in 2017, and Teigen was feeling envious of the models he was working with then.

“Fun fact, I had a jealously fueled meltdown visiting this video set and made an asshole out of myself to a large group of people,” Teigen wrote on a throwback series of photos from the shoot. “But in my mind they not only were talking about it, they were talking about it on purpose to rile me up. Looking back and knowing how well I know them now, THEY WERE DEFINITELY RILING ME UP AND GETTING A KICK OUT OF IT.”

She continued: “A few more shoulder touches and laughs with her later, I lost it,” she said after she saw Legend and a model laughing together on set. “Anger turned to sobbing turned to fleeing the set and getting a hotel room. The director (ALAN FERGUSON!) was baffled. Everyone was.”

Regardless, it's so important to remember that part of a healthy relationship is sometimes, well, getting into nonsensical, jealousy-fueled arguments... and laughing about it later. Thanks for the reminder, Teigen.