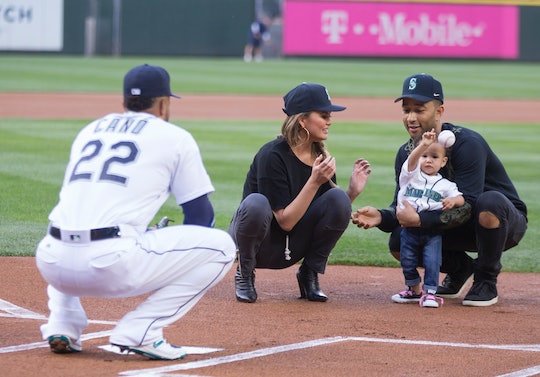 John Legend is a great example of what it means to be a male feminist. And he's great at pointing out the double standards that our culture has when it comes to gender roles. Most recently, John Legend said that he hopes to raise his daughter without gender stereotypes, which is a tough, but worthwhile challenge. In an interview with NBC News' Think section, he said that he's noticed the gender stereotypes about what's "acceptable" and what's not since the birth of his daughter, Luna, who was born in April 2016.

"I see it even as I’m raising my daughter," he told NBC. "The kinds of toys that are most likely given to girls versus the ones that are given to boys. The kinds of careers kids are steered into, even at a young age, that are seen as more feminine or more masculine." Later he added in the same interview:

We’re being taught very early on from movies and from the playground and all kinds of other things about how we’re supposed to interact with each other and perform our gender. We’re being indoctrinated pretty early on.

Aschewing gender stereotypes isn't just about raising daughters to know that they're equal and can do whatever they desire. It's hard for men, too.

Legend added that growing up as a black man, he has some perspective on what our society expects from both genders, and races. Legend told NBC:

I think there's a whole other expectation that comes with being a black man. I think we're expected to be even more masculine than other men are. Some of this expectation we put on ourselves, I think, to some extent. But it’s also driven from other people, as well as from the broader phenomenon of hyper-masculinity.

He added, "This manifests itself in a lot of ways that can be really harmful for us and for the people we interact with, women in particular." Legend said in the same interview that he felt lucky for his own experience growing up and that his father modeled a distinct kind of masculinity. His father worked on an assembly line, the new dad explained. "Kind of a stereotypically manly job in the day but at home he was really creative and expressive," Legend told NBC. "And so I feel like we always felt like we had the permission to be artists."

Legend reminisced, according to his NBC interview, "It was three boys and one girl that my dad raised, and we always felt like we had the permission to be confident in doing that kind of thing." That can also mean being a role model to other men. For example, Legend was mentioned in a recent episode of Insecure when he was compared to Lawrence in what was supposed to be an offensive comment about being the kind of man who's devoted to their family or a womanizer.

Legend told Cosmopolitan back in August that he's into that conversation, especially as it turns what he normally thinks is supposed to be "normal" for a man. He told the magazine:

I don’t mind being known as somebody who’s devoted to their wife. I am devoted to Chrissy [Teigen]. And when I write about [my commitment to her], it’s me being authentic. I think it should be cool to be a good partner, a good spouse, a good father, and/or a good parent. If I’m one of the people who helps make that cooler, I think that’s great.

Along with her parents making sure that she knows she doesn't have to fit into any gendered "box" society wants to put her in, it's likely that Luna will soak that up just by being around her parents. And grow up expecting that same mutual respect and love from her partners in life. With all of this insight and love coming from Legend and Teigen, Luna really is one lucky girl.