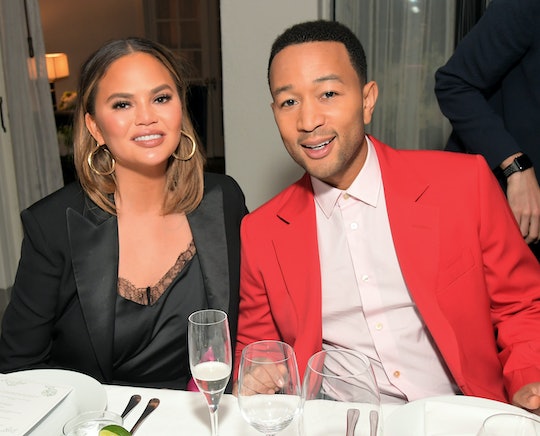 John Legend Thinks Chrissy Teigen’s Haters Should Come For Him, Too

"People were shaming Chrissy for leaving the house, and didn't say anything bad to me," John Legend, husband of Chrissy Teigen, tells Romper via phone of the first date night the couple took as parents. It was the first up-close-and-personal glimpse he had of the wildly unfair expectations placed on mothers, but not fathers.

Legend saw a lot of that happening at the beginning of his parenting journey: the public blaming his wife for things he was an active participant in, like undergoing IVF in order to have their children, Miles, 1, and Luna, 3, or fitting their then 7-month-old son with a head-shaping helmet to help correct what Teigen called "his flat."

"I think it's just a lot of these cultural traditions that have been too limiting and not inclusive enough over the years," he says. "Hopefully those things are starting to shed, but there are still remnants of them."

One way you can tell these antiquated ideas of parenthood are still prevalent? Changing tables... or, rather, the lack of them in men's restrooms.

A reported nine out of 10 dads have gone into a men's room that lacked a baby-changing table, according to a recent survey of 200 U.S. Parents by Pampers and Consumer & Market Knowledge. For Legend, that's simply unacceptable.

We just figure out who needs what and try to do what we can and never look at it as this is Chrissy's job and this is my job. This is our job, together.

So Legend, along with Pampers and Koala Care, decided to do something about this deliberate ignorance. Pampers recently announced a commitment to providing 5,000 changing tables for public men's restrooms across North America by 2021, as part of its #LoveTheChange campaign. "We’re excited to provide a physical manifestation that daddies can be part of the change, and daddy diaper duty is a real thing, and it’s really going to happen, and there’s a place for that to happen," Legend says.

And now that Teigen and Legend are parents of two, Legend realizes more than ever just how important it is to truly share the parenting responsibilities, and not in a way that keeps score or designates one person as the "primary" parent.

"I feel like we tag-team or we split, especially when Miles was first born and when it came to breastfeeding and having that be a regular part of the ritual with him," he says. "Chrissy had to tend to him more than I could, so I took it upon myself to be really make sure Luna was good. So we kind of split off that way. We just figure out who needs what and try to do what we can and never look at it as this is Chrissy's job and this is my job. This is our job, together. We're both parents and we make it work."

Legend is aware that when people shame Teigen online for their joint parenting decisions, they're keeping a very, very low standard for dads. “All the times when we’ve lowered the bar and have said dad is babysitting when he’s taking care of his own kids — no he’s not, he’s just parenting,” Legend says. The double standard is based on the idea that men go to work and women stay home. ("That hasn't even been the reality since the '70s for a lot of couples," Legend points out.) And that double standard makes it much easier for Legend to navigate the parenting sphere publicly than it does for his wife.

"There are all these gender norms that are baked into how people are having these conversations and the critiques people are leveling at her and not at me," he says. "I just wish people would think more about that and what that means."

The idea that either parent can be out working and leading and building businesses and doing whatever they do, that only happens if both parents are able to share in the parenting duties and support each other.

For Legend, joining the conversation about the roles dads can and should play in parenting their children's lives is one way to combat gender norms that leave his wife in the crosshairs of online hate while he is, for the most part, let off the hook (or even praised for minor parenting things... like changing diapers).

"All those times when we’ve lowered the bar, people are realizing that it’s not good for anybody," he says. "It’s making it so the onus is always falling on the female partner and not the male partner, and we need to help each other and take care of each other and support each other in our relationships and in our parenting."

Legend is committed to shutting down problematic norms that reinforce gender stereotypes inside the home, too. This, however, might be a bit heavier of a lift, considering his opposition is 3-year-old Luna. Most recently, she argued in a video posted by Teigen to Instagram that boys can only be called cute, while girls can only be called beautiful, to Legend's initial dismay.

"I was like a little troubled by it, because I’m like: 'Why do you think that only girls could be beautiful? I’ve never told you that, Mom’s never told you that, why do you even think that?' I don’t know where she got it from, but one way or another she decided that the descriptor for boys is 'cute' and the descriptor for girls is 'beautiful,' and that’s the way it’s gonna be. It's Luna's world."

With a 3-year-old daughter already awake to a world that wants her to be “beautiful,” Legend will surely have no problem taking outdated ideas of gender and parenting to task, too. (Legend says they’re also working on the “boys can’t be beautiful” thing.)

"The idea that either parent can be out working and leading and building businesses and doing whatever they do, that only happens if both parents are able to share in the parenting duties and support each other," he says.

So if you're going to hate on Chrissy Teigen for working, or going out, or making whatever parenting decision she makes, you better be hating on John Legend, too. After all, they're in it together.

More Like This
20 Best Backyard Toys For Kids Under $30 On Amazon
30 Easy Summer Activities For Kids That Work Rain Or Shine
Can You Get The Covid Vaccine For Kids Under 5 At CVS?
Tips To Co-Parent With A Stepparent Successfully