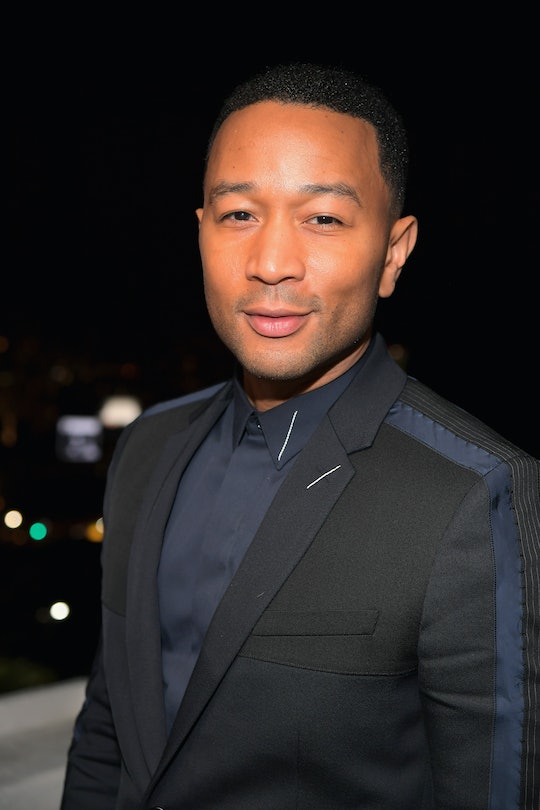 Every year brings with it another live television musical that audiences will tune into in droves, hoping that this new adaptation of an old favorite does it justice. NBC started the trend back in 2013 with The Sound of Music and they've continued to offer up classic musicals ever since, usually with an unexpected celebrity or two in the mix. Their newest offering takes a turn for the theological and has a very famous singer in the main role: John Legend will star in Jesus Christ Superstar on NBC, so start counting down the days until it airs on Easter Sunday.

The 1971 rock opera has long been a favorite amongst fans of musical theater. It follows the last week of Jesus' life with some incredibly catchy songs by Andrew Lloyd Webber and Tim Rice; even if you've never seen it, there are probably a few bars of the title song lurking inside your head. The chairman of NBC Entertainment, Robert Greenblatt, announced the casting news in a statement that seemed almost as excited as Legend's fans will be — or maybe more.

"We're all overjoyed to have world-class musical artist and producer John Legend starring as Jesus," Greenblatt said. "This score demands a singer with an amazing range and an actor with great depth, and there isn't anyone better to bring this story to a new audience. His casting is also groundbreaking as the traditional image of Christ will be seen in a new way."

Legend obviously has a lot of experience when it comes to music, but he's not quite as practiced as an actor (though he has acted before). He has appeared in a host of shorts and small parts, popping up in an episode of a show or a bit part in a movie, but playing Jesus in Jesus Christ Superstar will be his first lead role. He has been easing into acting more in the last few years with a supporting part in La La Land and a guest role on Underground, so it seems like a natural next step for his biggest role to combine his greatest strength with a new challenge.

Legend also seemed enthusiastic about taking on the role. As reported by Variety, he said, "I'm thrilled to join the cast of this production of Jesus Christ Superstar Live in Concert. It's such a powerful, meaningful musical and I'm humbled to be part of this performance. We've already formed an incredible team and, as we finish casting, I'm certain we will put together some of the greatest talents around to do this work justice."

Very little has been revealed about the casting of other parts in the musical, but it was preciously announced that Alice Cooper would be playing King Herod and David Leveaux would serve as director. When casting began, Greenblatt made it clear that they were actively seeking popular musicians so it's possible there will be more joining the show as things progress. "Casting has just begun, but we want to fill this classic show with as many recording artists as possible to give proper voice to what is the original rock opera score," Greenblatt told Entertainment Weekly.

It's still too early to divulge that many details about NBC's Jesus Christ Superstar Live in Concert!, and even harder to make predictions about what the show will be like. However, the people behind the scenes seem dedicated to putting out a production that both honors the original and does something new with it. As long as the songs are on-point — and with Legend singing them, they most definitely will be — then fans of the musical should have nothing to worry about.