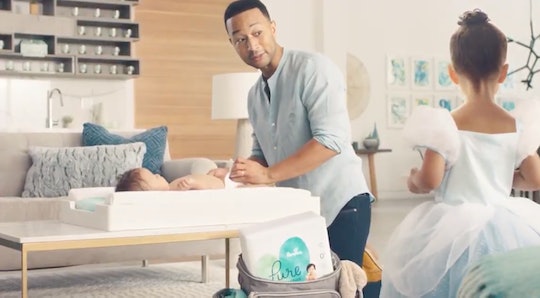 It's Super Bowl Sunday! Which means brands are bringing out the big guns with yet another round of highly-anticipated ads. From taking advantage of the "aww" factor with babies and animals, to finding fresh ways of pulling at our heartstrings or making us laugh, companies once again hoped to leave a lasting impact on viewers on Feb. 3. (It's no wonder some people tune in just for the commercials themselves!) And this year, the ads certainly didn't disappointment. In fact, John Legend's Super Bowl ad is an adorable nod to hands-on fathers.

As part of Pampers' new "Love the Change" campaign, Legend was featured in a new ad that dropped on Super Bowl Sunday. Don't worry about missing it, though, if you need to take a bathroom break during Super Bowl commercials; the ad debuted exclusively on social and digital media only.

"Somebody's got a stinky whew!" Legend sings at the beginning of the ad, while making a cringe face as he starts changing his 8-month-old son, Miles, whom he shares with wife Chrissy Teigen. "I'm gonna need some backup on this one," Legend declares, as he looks to his and Teigen's 2-year-old daughter, Luna, who half-heartedly throws a single baby wipe in his direction. (LOL, toddlers are always so "helpful.")

Clearly, this was not going to suffice. "Guys?" Legend calls out, looking over his shoulder.

See the full ad, featuring Adam Levine and Chrissy Teigen (and plenty of cute babies), below:

"Dads today are choosing to be more hands on and present than ever before, and Pampers wants to celebrate that," a news release reads. "In fact, according to a recent Pampers study, 90 percent of dads consider themselves to be 'hands-on' but more than half feel like society places less value on dad's parenting role than mom's." The news release continued:

Pampers understands that raising babies is a team sport and as millions of families tune in to watch the big game together, Pampers saw this as the perfect moment to spotlight and celebrate dads and their special role.

In case you missed it, Legend's original "Stinky Booty" ad for Pampers came just in time for Father's Day last year. It featured the celebrity dad changing then-1-year-old Luna's diapers. And because I know you're just dying to know, the lyrics to the cute tune go a little like this:

"Somebody's got a stinky booty.

Her name is Luna and she made a poopy.

Somebody's got a stinky booty ...

And daddy's gonna clean it up."

Ahead of the release of "Stinky Booty 2.0," Legend told People that he and Teigen have always taken a joint approach to diaper duty. "It’s just whoever is able to do it at that time," he said. "It has never been a thing where it’s like, 'You have to do it or I have to do it.’ It’s like, 'OK, I have him right now and his diaper needs changing, I smell it, I’m going to change him.' I’ve always been like that, and never felt any hesitancy to do it."

Legend continued, according to People: "I had never changed a diaper before Luna, but I learned quickly. It’s not hard — just do it."

Regardless of who should ultimately get credit for the "Stinky Booty" song, you have to admit it's pretty darn adorable. I love that Pampers is featuring hands-on dads in its latest campaign. Because why shouldn't dads share this particular parenting chore? Who knows, maybe the visibility of celebrity dads changing diapers will finally result in more changing stations in mens' public restrooms? Then, more fathers can take over diaper duty while out and about, too!