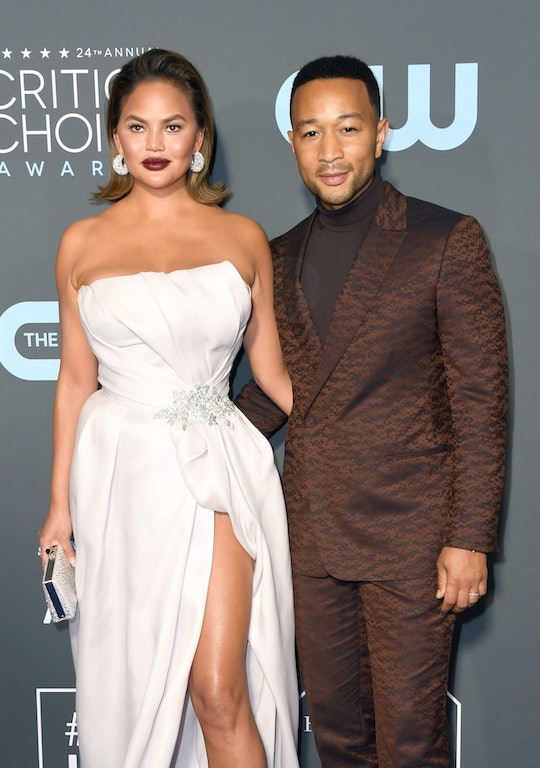 John Legend has written some of the most romantic songs around, but his most passionate declarations are reserved for his better half, Chrissy Teigen, the beautiful model, chef, influencer, cookbook author, and mother who is clearly as talented as her mate. And John Legend's most romantic quotes about his wife will make you swoon.

The couple, who People reported have been together for 12 years — five of them as husband and wife — have a full life of family commitments and career. USA Today reported that Legend is the first Black man to achieve "EGOT" status — that means he's won an Emmy, a Grammy, an Oscar, and a Tony. None of which stopped Teigen, who's become a social-media star, from posting pics of the hubby napping instead of attending this year's Grammy show. "John got [an] EGOT and egot lazy," she deadpanned on Twitter. These two are a total power couple.

The pair always seem to have fun together amid the chaos of life with Luna and Miles, their two kids. Between Teigen's funny Instagram comments on their life, their shared love of lip syncing and penchant for having fun, such as a themed party at their Beverly Hills home for Legend's 40th birthday, this pair seems to look at life as a shared adventure.

Plus, a big part of their success seems to have to do with deep mutual admiration. Here's are some of Legend's cutest quotes about their romance:

"There’s a song on my album that actually could be pretty good for the wedding," Legend explained to People back in 2013, around the time of his wedding. "It’s called All of Me and it’s inspired by Chrissy. She loved the song and cried when she heard it,” he told the magazine.

I mean, come on... A lot of people have great spouses, but how many write a song about their enduring love? I guess it doesn't hurt that Teigen married a guy who makes a living with his lyrics...

He Fell In Love With Her Because She's Smart

Every woman likes to be appreciated for who she is inside. And though Teigen made her living as a model for many years, Legend says it was actually Teigen's wit that wooed him.

Legend seems to be about as far from a stereotypical checked-out working dad and husband as you can get, and his quotes on the topic of domestic life show that's he's not afraid to get his hands dirty with chores related to a home and kids.

"I’ve always loved to cook, but I do it more now because she needs to sit down more," he told People during Teigen's second pregnancy, with cookbook author Teigen adding to Bon Appetit that "he cooked seven days a week while I was pregnant. He was always my sous; he loves to chop things. You teach him one thing and he remembers it forever. Now he’s become a chef in his own right."

In fact, the singer is so helpful that Teigen, who recalled her battle with postpartum depression and anxiety to Glamour in 2017, recalled nights when she slept on the couch... and Legend would join her there in support. Really touching.

Legend is kind of a big deal in the entertainment industry, but when it comes to his wife, he's as goofy as someone waiting at the stage door for an autograph, not afraid to let his inner fan out.

"I just want to support her," Legend told Cosmopolitan in 2017 about his wife. "I want her to be happy and to live the fullest, most awesome life she can, and I want us to do it together. Whenever she sets her mind to anything, I always tell her, 'I want to support you and help you do it.'"

He Knows He's Perfectly Imperfect As A Spouse

"I think it’s too much pressure to put on anyone. However, I don’t mind being known as somebody who’s devoted to their wife. I am devoted to Chrissy. And when I write about [my commitment to her], it’s me being authentic."

This guy may be modest, but I don't mind saying that he's amazing, and his partnership with Teigen seems destined to go the distance.

More Like This
Keke Palmer Is Pregnant & Expecting Her First Child With Boyfriend Darius Jackson
Everyone Told Me To Date Post-Divorce, But Being Alone With My Kids Felt Better
Netflix Reveals Release Date & The Bombshell Trailer For 'Harry & Meghan'
David Beckham Impressed Mariah Carey With His Rendition Of "All I Want For Christmas"