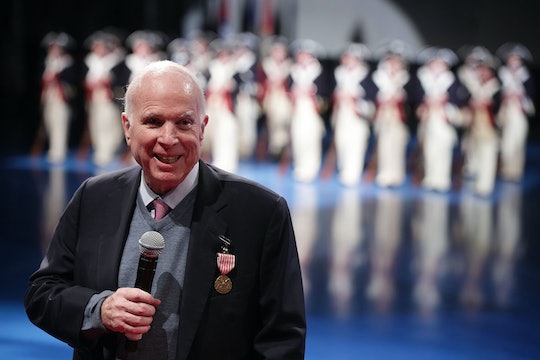 In a statement released to the press on Aug. 24, the family of Arizona Sen. John McCain announced that he had decided to discontinue medical treatment after battling an aggressive form of brain cancer for over a year, and on Saturday, Aug. 25, they sadly confirmed that John McCain had died at 81 years old. Romper's request for comment from McCain's representatives was not immediately returned, but on social media, tributes for the Republican politician have been rolling in, and more than anything, they have honored his strength, patriotism, and years of unwavering service to his country.

McCain was a prominent member of the GOP for many years: he was first elected to the United States House of Representatives in 1983, according to CNN, and in 1986, he won a seat in the Senate following the retirement of Arizona Sen. Barry Goldwater. On Nov. 2016, McCain was elected to his sixth term in the Senate, but he had also made two bids for the Oval Office throughout his career — once in 1999, and again in 2007, when he went on to secure the Republican presidential nomination with his running mate, former Alaska Gov. Sarah Palin, before losing the election to President Barack Obama in 2008. Despite never taking the White House though, McCain remained a key figure in the GOP and the Senate, and earned a reputation over his over 30-year career for being someone willing to push back when he disagreed — even against his own party.

One notable example? In July 2017, not long after he'd publicly announced his cancer diagnosis, McCain returned to the Senate to vote against the Trump administration's Obamacare "skinny repeal" with a dramatic thumbs-down, according to TIME, and lent his support instead to all 48 Democrats, as well as Republican Sens. Lisa Murkowski and Susan Collins who also opted to vote against the measure. The President Donald Trump called out McCain and his fellow "no" voters in a tweet following the failed vote, and claimed they'd "let the American people down," but in a statement, McCain said it was the right thing to do. He said,

[The amendment] offered no replacement to actually reform our health care system and deliver affordable, quality health care to our citizens. The Speaker's statement that the House would be ‘willing’ to go to conference does not ease my concern that this shell of a bill could be taken up and passed at any time ... We must now return to the correct way of legislating and send the bill back to committee, hold hearings, receive input from both sides of aisle, heed the recommendations of nation’s governors, and produce a bill that finally delivers affordable health care for the American people. We must do the hard work our citizens expect of us and deserve.

As much as McCain may have dedicated much of his life to politics though, his service to his country actually began long before that. The son and grandson of United States Navy four-star admirals, according to Biography, McCain trained as a Navy pilot and fought in the Vietnam War. In 1967, he was captured after his plane was shot down, and he spent more than five years as a prisoner of war. In his 2000 memoir, Faith Of My Fathers, McCain wrote about the ordeal, according to Business Insider, and said he was regularly beaten and tortured prior to finally being release in 1973.

In their statement Friday, McCain's family wrote that while he had "surpassed expectations for his survival," since his brain cancer diagnosis, "the progress of disease and the inexorable advance of age [rendered] their verdict," and said that "with his usual strength of will, he has now chosen to discontinue medical treatment." Though McCain remained in his role as senator throughout his illness, he'd been absent in Washington since December, according to The New York Times, choosing instead to remain at his ranch in Arizona. The same day that the McCain family confirmed he'd decided to stop treatment, sources told the outlet that his family was with him at his home, and that "his death [was] imminent."

In an interview with CNN's Jake Tapper in Sept. 2017, McCain spoke about his illness, and though he remained optimistic about his prognosis, it's clear he'd also given some thought to his legacy. When asked how he hoped the American people would remember him, McCain said,

Though the nation may currently be sharply divided when it comes to politics, it's been clear ever since McCain first disclosed his diagnosis that his strength, dedication, and love of his country had earned him a great deal of respect, even among those who may not have necessarily agreed with his political viewpoints. And now, in the wake of his passing, it sounds like the nation is remembering him precisely the way he'd hoped.