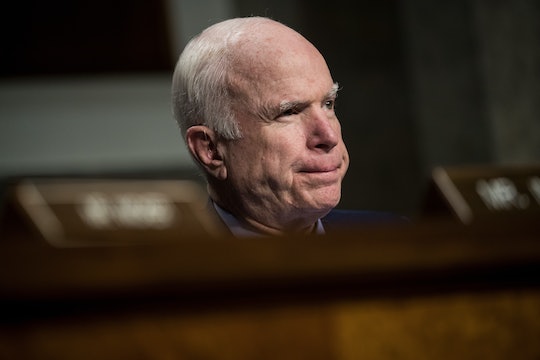 It's been kind of difficult to keep up with the many scandals following Donald Trump's presidency. So, it's understandable if you haven't seen that John McCain said Trump's Vietnam bone spurs deferral proves that one of these men is an American hero, while the other is merely privileged. Yes, it's been quite a long 10 months hasn't it? Nevertheless, while I could go on for lengths about Trump's history of degrading women, or his travel bans, or Twitter rants, that's not what this story is about. No, now it's crucial to talk about the fact that this one GOP Congressman slyly hit Donald Trump where it hurt: his patriotic ego, and for good reason, too.

But in order to truly understand what McCain said, we've got to go back a bit. The truth is, the two politicians have had somewhat of a complicated history since Trump first announced his candidacy for the presidency back in June 2015. Then, Trump attacked McCain's status as a veteran, saying, according to Uproxx:

He’s not a war hero. He was a war hero because he was captured. I like people who weren’t captured.

Of course, the irony here is that Trump was never fighting in any war, so just how does he know what it's like? Well, that's something McCain has long taken issue with, and his latest comments about draft deferrals prove just how in the wrong Trump was and is.

Because, factually, Trump deferred the draft a reported five times while the United States was at war with Vietnam, the last one being the most suspicious, according to The New York Times; while Trump's first four deferrals for education while he was attending the University of Pennsylvania were extremely common and relatively unproblematic (although they still exhibit huge levels of privilege), his last reason for dodging the draft is questionable. According to The New York Times,

He received a diagnosis that would change his path: bone spurs in his heels.

The diagnosis resulted in a coveted 1-Y medical deferment that fall, exempting him from military service as the United States was undertaking huge troop deployments to Southeast Asia, inducting about 300,000 men into the military that year.

And while, of course, if Trump truly did suffer from bone spurs during this time, then that's sad. But, the reality of the situation is that medical exemptions were very common at that time, but only for some, as McCain noted Sunday.

Sunday night, a C-SPAN interview with McCain about the Vietnam War aired, and with it, one of McCain's most crucial critiques of the president:

Of course, McCain never actually said Trump's name in this segment of the interview, but it's pretty clear who he was talking about. And he's got a point. As The New York Post noted, the Vietnam war draft was anything but fair. "It gave a relatively easy out to 15.4 million mostly middle-class, draft-eligible young men between 1964 and 1973, compared with 1.8 million mostly working-class and poor men who were called to duty."

And truly, Trump's medical exemption is quite suspicious, as he himself cannot recall many details about that time, and during the presidential campaign, "Mr. Trump could not recall which heel had been involved, prompting his campaign to release a statement saying it was both," according to The New York Times. And while Trump also told the Times that the bone spurs were "not a big problem, but it was enough of a problem," it remains clear that something is off about that story.

And for McCain, that's not right. Because while Trump was filing deferment after deferment, McCain was fighting for his country, and learning what it means to be a hero. According to Politifact,

McCain ended up in a Hanoi POW camp after his Navy dive bomber was shot down in 1967. He broke both arms and a leg as he ejected. He endured enormous pain and torture and spent over five years in captivity.

So, while Trump may continue to blast McCain for not being a good enough war hero, or not voting to strip away health care for millions of Americans, the truth is that McCain fought for the United States, and Donald Trump? He dodged that moment in history.