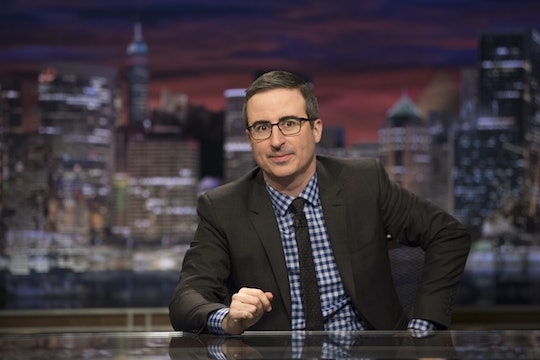 President Donald Trump held a press conference from the White House this past Thursday, finally addressing one of his long-held campaign promises: to end the opioid epidemic. Except instead of declaring a national emergency — which actually could have sped up the allocation of federal funds to address the problem — he merely called it a "public health emergency," which has a minimal course of action attached to it. John Oliver discussed Trump's opioid crisis plan on Last Week Tonight, pointing out that it sounds a little familiar.

"This was an idea that I had, where if we can teach young people not to take drugs, it’s really, really easy not to take them," the president said during the presser. If that idea that he had gives you a sense of déjà vu, that's because Nancy Reagan had it 35 years ago. The "Just Say No" campaign and the subsequent D.A.R.E. program were part of former President Ronald Reagan's "War on Drugs," which we now know has failed massively and is a huge contributing factor to the drug culture we have today.

In a 2016 Guardian piece on Nancy Reagan's legacy, published the week after her death, Michael McGrath wrote:

The 'Just Say No' message has become increasingly meaningless in the face of the US opioid epidemic, which largely stems from prescription medications. Every day 75 people die of heroin or painkiller overdoses in America.

Much like abstinence-based sex education, Dare and 'Just Say No' spread fear and ignorance instead of information, placing all responsibility on the individual while denying them the tools they need to make key decisions.

So Trump's plan to address the opioid crisis is to repeat an old strategy that we know failed, and slap his name on it to boot.

"I mean, sure, it is important not to start abusing opioids, but that doesn't really help the people who are already struggling with addiction," Oliver reasoned in the segment. "It's kind of like seeing someone neck-deep in quicksand and then putting up a 'Don't Do Quicksand' sign."

He also pointed out that this was Nancy Reagan's idea first, before showing a truly baffling clip of Trump leading a group of boys through a drug abstinence pledge. Trump recited, "I promise Donald J. Trump that I will never take drugs. I don't want to say no alcohol, but take it easy on the alcohol."

At which point, Oliver interrupted:

What are you doing? Why are you walking back the pledge as you go? You would be a terrible wedding officiant! 'Do you take this woman, I don't want to say forsaking all others. There are going to be others, but take it easy on the others and don't let them call you at home.'

It's true, Trump has finally chimed in with his two cents about how to tackle this crisis and it involves allotting for the 2.6 million Americans addicted to opioids literally about two cents each. So Trump's fix for our opioid epidemic essentially boils down to, "here's two pennies, go throw them in a f*cking mall fountain, and wish your addiction away."

Trump has also drawn criticism for engaging in more of his trademark meaningless political theater as a deflection from the work he's failing to do in Puerto Rico. From stealing a former first lady's (not-so-successful) idea and rebranding it as his own to not actually providing very much meaningful crisis management, Trump figured out how to botch the execution of yet another campaign promise, while calling it successful.