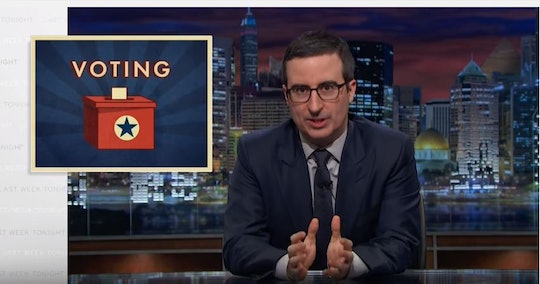 Last Week Tonight with John Oliver returned to start a new season on Sunday and Oliver didn't pull any punches with his hilarious — and eye opening — take down the injustice of states' use of voter ID Laws, which restrict people's access to the polls if they don't have a valid form of ID. He explained that even though lawmakers call voter ID laws "common sense" measures to limit fraud, the fact that they keep a shockingly large number of people from being able to exercise their Constitutional right to vote makes them unfair. Fans can watch John Oliver go after voter ID Laws in his season premiere and remember how much they've missed the lovable, nerdy Brit over these past few months.

In Texas alone, Oliver explained, more than half a million people don't have the necessary ID to vote, despite lawmakers saying that the numbers are "insignificant." North Carolina and Wisconsin, two other states that have enacted voter ID laws, have 300,000 voters each who aren't eligible because they lack the necessary, state-issued photo identification. And, he explained, that at the same time voter ID laws are being passed across the country, states make it unreasonably difficult to obtain the appropriate photo IDs with limited office hours and ridiculous requirements. For example, one 68-year-old woman in Pennsylvania tried three times to get a state-issued photo ID because she was asked to supply her husband's death certificate to prove her married name was valid in addition to an original birth certificate and a social security card.

Ultimately all the time and energy required to get the proper identification drives people away from the polls, which might be exactly what state lawmakers have in mind when they pass these laws.

First Oliver hilariously responds to Wisconsin Rep. Joel Kleefisch who argued for strict Voter ID laws in his state by saying if it's OK to ask for an ID to buy cold medicine, then it should be just as acceptable to require ID to vote. Bonus points for Oliver for referring to him as "business-casual Kevin Smith" as he explains that voting is a right, unlike Sudafed, that, when denied, threatens democracy.

To help everyone remember, Oliver gave viewers a rhyme, "March, June, August and November have five Wednesdays, but remember, if you come on days not those, go f*ck yourself they're f*cking closed."

Studies show, he added, that these voter ID laws tend to impact black and Latino voters in higher numbers than other groups. In Texas, black people are 1.78 times more likely not to have the right ID to vote. Latinos in Texas were 2.42 times more likely to lack the right ID. "Something white people seem to be more likely to have," Oliver said. "Like a sunburn ... or an Oscar nomination."

And, to legislators who say voter fraud is a sufficient reason to require ID, Oliver says it really only prevents "voter impersonation," which he compared to "forging a Bed Bath & Beyond coupon."

Then, Oliver showed jaw-dropping footage of Republicans actually explaining how voter ID laws are super helpful for helping candidates from their party get elected. "Think about this, we cut Obama by 5 percent ... I think that photo ID helped a bit in that," the Penn. Chair of the Republican Party unbelievably admitted on camera. Oliver's response says it all.

But, here's the craziest part: The people who are actually engaging in ridiculous levels of voter fraud, Oliver pointed out, are in the state houses. He showed video of state legislators all across the country voting on behalf of people who weren't there. It's a common practice called "ghost voting" Oliver said. In Tennesee, lawmakers have special sticks that help them push the voter buttons from a distance to help them get the jump on their rivals. Sticks, Oliver joked, that look like what an "angry leprechaun would use to beat a child."

What's Oliver's proposal to even the score between voters and legislators who support voter ID laws? Make those lawmakers get a new ID each and every time they want to pass legislation, just to make sure everything's on the level.

Watch the segment for yourself. It's nice to have Oliver back on the air and taking on the topics no one else is funny enough to turn into crazy good comedy. Because sometimes all voters can do is laugh to keep from crying.