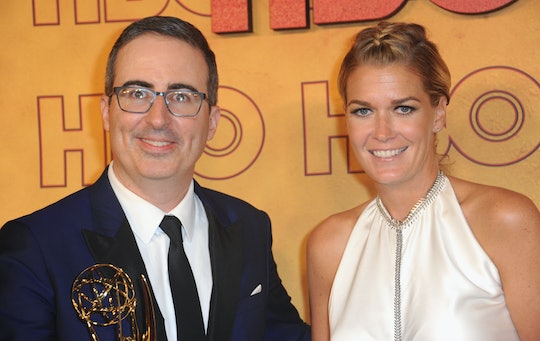 While much about the annual award show was different this year, John Oliver thanking his wife at the 2020 Emmys showed that one thing has stayed the same — our favorite celebrities have relied on their loved ones to help them achieve their goals during this trying time. As Oliver touched on, his wife Kate Norley plays a crucial role in his success.

In his acceptance speech for Outstanding Writing for a Variety Series, given remotely, Oliver praised Norley for making his HBO show, Last Week Tonight, possible. "I want to thank my wife, Kate, thank you very much! She's done my makeup, she's kept a 2-year-old and a 4-year-old out of this room as I've been trying to do the show," he said.

Oliver and Norley have been married since 2011 and the couple first met in 2008 at the Republican National Convention. He was there reporting for The Daily Show, while she was campaigning with Vets for Freedom, according to CheatSheet.

Norley has quite the impressive professional background. She is an Iraq War veteran who served as a United States Army medic, so suffice it to say a little baby wrangling and makeup is well within her ability. But the role partners play in celebrities' successes — from emotional support and cheerleading, to practical matters like proper concealer application and entertaining toddlers — cannot be understated. This is a win for the whole Oliver-Norley family. Congrats!