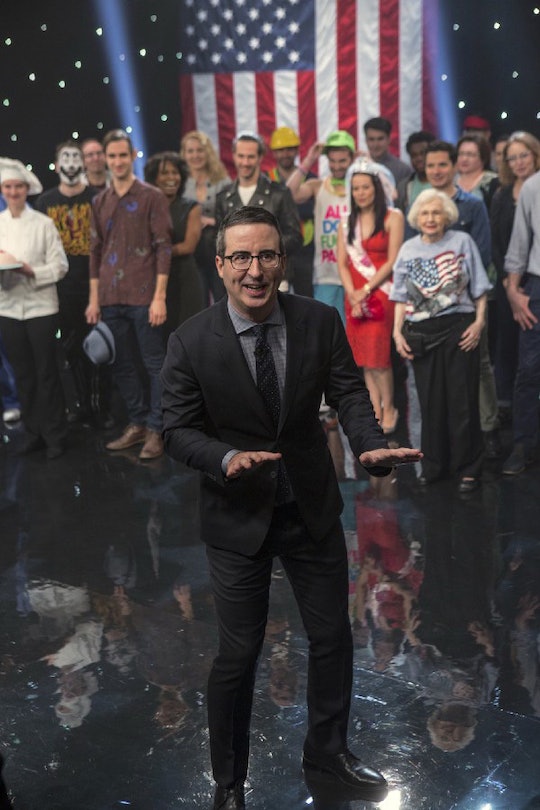 Everyone in America knows that Donald Trump is obsessed with the border between the United States and Mexico, but what people don't know is that the wall is not his only plan. John Oliver's border patrol segment on Last Week Tonight took down Trump's plan to add more border patrol agents, even though the plan seems fairly innocuous. Most of Oliver's segment focused on the fact that this is not the first time that the U.S. has tried a huge surge in hiring border patrol agents. And the first time, things did not go well.

Immediately post 9-11, George W. Bush also oversaw a huge surge in hiring border patrol agents, in which the number doubled from 10,000 agents to 20,000 agents, an increase Oliver compared only to the surge in reality shows featuring cakes — an excellent point. Oliver also noted that recruitment was "aggressive," going so far as to join the ranks of esteemed brands like Depends and literally sponsor a NASCAR team. Of course, this also meant that hiring standards were not nearly so high as they once were, with many corners being cut that probably (definitely) should not have been cut. And yes, people have died as a direct result of this policy. Though adding more agents to the border may seem like a solid alternative to a fantasy wall that will probably not be built, there's a lot of risk associated with it.

During the last hiring surge, Oliver noted that "as they doubled in size, meeting and maintaining their hiring quotas meant that their screening process wasn't always as strong as it could have been." For instance, some of the things that were cut back were polygraph tests, basically de rigueur for most law-enforcement agencies in the United States. Training also suffered, with cutbacks to Spanish and physical training, which Oliver chuckled meant that they cut back on agents' abilities to both communicate with people and to catch them should they run away.

Oliver applauded that some regulations were being re-written now, including one that prohibits shooting suspects who are fleeing and appear to be of no danger, with the important caveat that this seems like one of those rules you shouldn't have to write down. It's like being at the zoo and seeing a sign that says "Please don't finger the armadillos," Oliver joked, making one wonder what exactly had been happening at the zoo.

The main takeaway is that while adding more border patrol agents isn't necessarily a bad thing, the government should maybe learn from past mistakes. Fingers crossed.