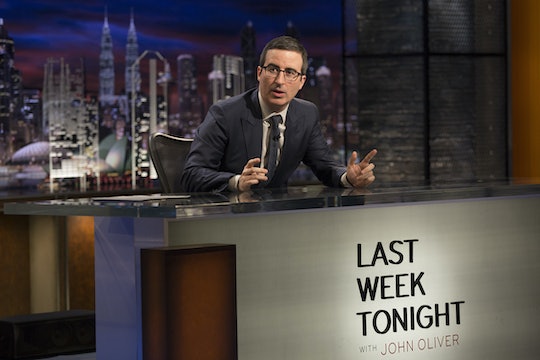 This year's International Women's Day was a historic one, because the organizers behind the Women's March on Washington decided to celebrate with a women's strike. They dubbed it "A Day Without a Woman" and it was intended to underscore how much women contribute by showing what a deficit they leave behind in their absence. John Oliver's International Women's Day segment on Last Week Tonight perfectly captured all the ways dudes the world over promptly botched their well-intended "tributes" to women.

It's been a popular comedy theme all weekend. Even SNL got in on the joke, with a sketch presented "in honor" of International Women's Day, which was just Kyle Mooney and Beck Bennett mansplaining women's issues while the entire female cast thanked them. But Oliver shouted out specific male world leaders giving actual International Women's Day speeches, and those were truly cringeworthy.

"Every year," began Oliver, "the best way of gauging not just how far women have come, but perhaps, how far they still have to go, is by watching powerful men around the world trip over their dicks talking about the day."

He wasn't kidding. Vladimir Putin vowed, "We will do our utmost to surround our dear women with care and attention, so that they can smile more often."

Brazilian president Michel Temer invoked women's crucial role in the economy by declaring, "Nobody is more capable of pointing out changes in supermarket prices better than women."

Unfortunately, as you probably guessed, this was all driving toward one particularly appalling American man's inane comments about the Women's Strike and International Women's Day.

A local San Antonio morning news anchor proudly announced that it was International Women's Day: a day women "can do whatever [they] want," like start on their bikini bodies with these helpful workout tips. Um, first of all, International Women's Day isn't just like, an excuse for women to treat themselves. (That's Treat Yo'self 2017.) Second of all, "whatever women want" is generally not defined as dudes telling them to work out in order to wear bikinis, because PSA: literally anyone can wear a bikini if they want to, no workout necessary. But he didn't stop there.

When mentioning that some women were striking, the anchor inexplicably stammered out, "That's a good thing because, when you come down to it, that's where we all come from." Oliver retorted, "That is a pretty limited understanding of human reproduction. I bet if you asked him to label a chart of the female anatomy, he'd probably just write 'Noice!' across the top of it and leave it at that."

As as funny as it was to watch Oliver skewer men for bumbling their way through appreciation for women, it highlighted a serious problem. Men who are put in public-facing positions with an expectation of thoughtfulness and intelligence couldn't be bothered to do an ounce of critical thinking about women's rights, their impact on the world, the intersectional struggles they face, or how to greet them for one single day with authentic empathy and compassion. It proved that they didn't do any real thinking at all about what to say, focusing instead on jokes, platitudes, and their next segue. It was satisfying to watch Oliver mock them, but apparently, men even need women to demonstrate how to uplift women properly.