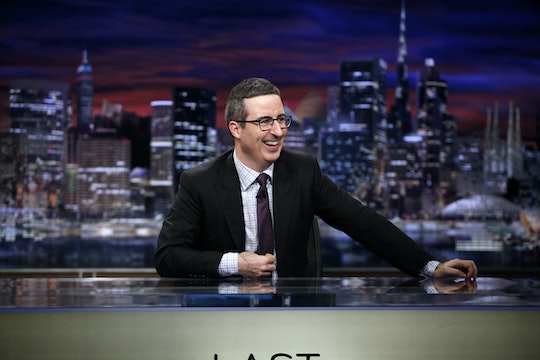 For his main story this week, John Oliver's Jared Kushner and Ivanka Trump segment on Last Week Tonight methodically unpacked why their lofty positions in President Trump's White House could be so dangerous. For Kushner, it's merely a question of his qualifications. But, Oliver cautions, for Ivanka, the threat is much more sinister.

As the segment laid out, Kushner has been appointed as the primary contact person for two dozen countries, is expected to manage the entire opioid epidemic, and has essentially been left to ~solve~ the Middle East on his own. "Jared's portfolio would be unmanageable for the smartest man on earth," Oliver insisted. And in a smash cut of interviews speaking to Kushner's talents, most people chalked up his skill set as speaking very little, while listening very well in meetings. Oliver pointed out:

So he's brilliant because he's quiet? Just because you don't talk does not necessarily mean you're thinking something amazing. It can just mean that you're sitting in a meeting, staring blankly at people's moving lips, thinking about why baby cats aren't called 'cattens,' or whether all goldfish might have peanut allergies, but since they don't ever eat peanuts, we'll just never know.

Furthermore, he hardly ever gives interviews, so there are only second hand accounts of what he might be like to work with. Unfortunately, his professional portfolio, while not terrible, is also not particularly great. There are reports that his SAT scores and GPA "didn't warrant" his Harvard acceptance and that his dad donated $2.5 million to the school in the years before his acceptance. Kushner then took over a bad real estate deal for his father after he went to prison, briefly owned The Observer, and had another flawed startup "campus" project called Dumbo Heights. And again, while none of this is awful, Oliver and others argue, it also doesn't qualify him to handle international relations, conflict in the Middle East, or an opioid epidemic.

The best thing he has going for him is that he's better than Steve Bannon. Said Oliver:

That is a low bar. That recommendation would get you no other job. We shouldn't be excited about a top White House adviser simply because he is preferable to a man best described as: every dark thought humanity has ever had, inhabiting the dead corpse of a Civil War era plantation owner, that even his fellow plantation owners called 'a bit much.'

As for Ivanka, her real threat is that she has been trained in the art of Trump branding since birth. She has an uncanny ability to say nothing of substance, or to even promote flat out lies, like her dad's empty child care proposals, while simultaneously staying on the Trump brand and reinforcing the good associations people have with it.

Ivanka, Oliver argued, is not really the moderating force everyone makes her out to be. She is simply the sane counterpart to her dad's unhinged behaviors. She even admitted in her CBS News sit down that most people wouldn't really know or hear about what she was doing in the White House. She was trying to make it seem like her job wasn't that important, but it's also terrifying to think that someone is in a high-level White House position doing work that no one ever hears about.

Ultimately, said Oliver of Kushner and Ivanka, "If they are the reason you are sleeping at night, you should probably still be awake." And that's really the most frightening thought of all.