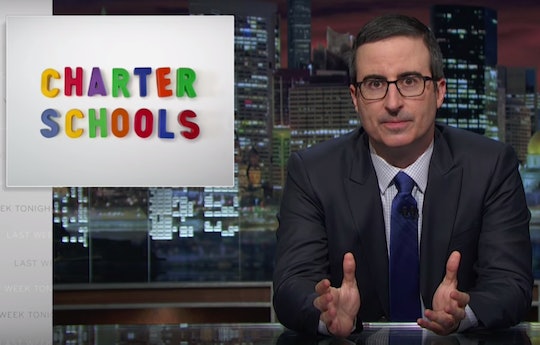 Charter schools often have serious kid appeal: many offer flexible schedules, some let students take all of their classes online, and the educational model is generally geared to the individual. Magnet charter schools offer the added excitement of giving children the chance to tailor the curriculum to focus on the subjects they love, from engineering to the performing arts. Unfortunately, not all charter schools deliver on the innovative personalized approach to learning that they promise, and John Oliver's segment on charter schools on Last Week Tonight Sunday night revealed that nontraditional educational opportunities can sometimes be compromised by the ambition of founders and lack of state regulation.

Almost three million students attend the 6,700 charter schools in the United States, TIME reported. Only eight states don't have any; for most kids in the country, they're an easy option. Because charter schools use taxpayer money, they have to admit any child who wants to attend (space permitting), according to U.S. News & World Report. Though they may have smaller class sizes than most public schools, charter school leaders get a much greater deal of autonomy in determining how the institution runs; the charters they write guide their decisions, not the input of an elected school board. This leaves students and families vulnerable.

During Last Week Tonight's segment on charter schools, Oliver opted to drive the discussion away from whether the institutions are a good idea and focus instead on whether they're actually able to live up to their own ideals. Depending on state laws, it can be surprisingly easy to start a charter school; Oliver's team found one case in which a founder plagiarized the charter of another school and still got approval. Oliver explained that the low barrier to entry makes it surprisingly simple for individuals with questionable intentions to secure thousands of dollars of taxpayer money:

And the problem with the approval process being too easy is there is a lot at stake in charter schools. They get paid on a per-student basis. On average, that's about $7,000 for every enrollment, and that adds up.

Lax state standards for charter school spending, structure, and performance are distressingly common, Oliver reported. Zeroing in on Ohio, Oliver described the extent of the problem:

But Ohio's charters have had huge problems with lack of oversight. A review of one year's state audits found charters misspent "public money nearly four times more often than any other type of taxpayer-funded agency."

Unfortunately, chronic problems with mishandling of funds mean that families often get shortchanged. Some online schools consistently report 100 percent attendance even if children haven't logged in for days. Oliver said that poor oversight of educators leads to poor oversight of learners:

You're basically giving kids a box containing video games, pornography, and long division and claiming a hundred percent of them chose the right one.

Not all charter schools are risky; there are plenty of teachers using the model to create new and exciting options for students disillusioned by traditional modes of learning. Before enrolling a child in a charter school, though, it's important to do some independent research to determine whether leaders are investing in the students or in themselves. The Center for Research on Education Outcomes (CREDO) at Stanford University offers state-specific charter school reports that may be a good starting point, but paying careful attention to a school's performance history is essential.