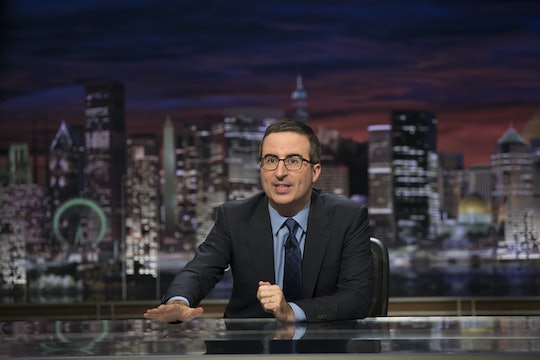 Amidst the Grammys chatter (or should I say Beyoncé chatter), you may have forgotten that Last Week Tonight returned Sunday night for another season of keeping us sane. This is the first episode of John Oliver's late night show since a few days after the 2016 election – so he clearly had a lot to catch up on. Oliver was a noted critic during Trump's campaign, so we've been wondering how he's going to handle the actual presidency. On the Season 4 premiere, John Oliver's "Trump vs. Truth" segment showed he won't hold back this year.

Oliver, a former Daily Show correspondent, ventured off with Last Week Tonight on HBO in 2014; with the increasingly ridiculous political climate, Oliver's commentary has only become more and more relevant. This is proven by the ratings: they just keep going up. According to The Hill, his ratings hit a high in early 2016 with his "Donald Drumpf" bit, and they've held up for the rest of the season. During a breakfast with Oliver and journalists, HBO's CEO Richard Plepler commented on the show's success. "What’s interesting is that audience has done nothing but grow," he said according to Forbes. He told Oliver, "Keep doing exactly what you’re doing."

Oliver did just that in the premiere with a segment titled "Trump vs. Truth." He pointed out some of the major lies he's told – both before he won the election and through the first weeks of his presidency. He commented that some of the lies were bizarre but relatively harmless, like lying about the rain during his inauguration speech. If Trump's willing to lie about this, though, he's willing to lie about more serious matters – which Oliver dived into. He brought up Trump's longstanding, racist birther claims and his lies about statistics concerning unemployment and crime.

Subsequent episodes, though, may not be so heavy on Trump. Oliver commented that it might get old. "I'm very anxious to not make it all Trump all the time," he said, "just on the level of interest and what the human soul can sustain." As we've experienced just in the few short weeks of Trump's presidency, the human soul can indeed only take so much of Trump at one time. We're lucky, though, to have Oliver's commentary to help us make sense of it all – and, at times, distract us.