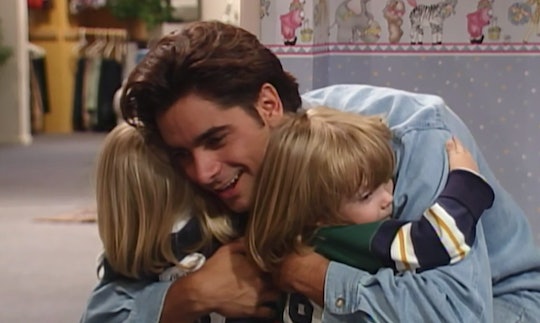 One of the world's premier silver foxes is officially ready to become a father. That's right, Uncle Jesse is about to become a dad in real life. And now, John Stamos' Full House son just said the sweetest thing about his baby news, and it will seriously make you day.

On Wednesday, news broke that Stamos and his fiancée, Caitlin McHugh, are now expecting their first child together. And while the world had already collectively wept when Stamos announced his engagement as it meant that one of the most eligible bachelors was off the market, this news is a being met with a bit more enthusiasm. Obviously, when anyone is starting their own family, it's an exciting time, but when it's John Freaking Stamos? It's an event.

Stamos revealed his baby news in an exclusive interview with People, and it's fans are beyond thrilled for the dad-to-be. And now, one of his former co-stars is offering his own congratulations. Blake Tuomy-Wilhoit, who starred as Nicky, one-half of the adorable twin sons in Full House (and even on Fuller House) told E! News that he was so excited for Stamos and McHugh. Additionally, he shared that he's pretty confident that Stamos is going to be an excellent father.

As fans will remember, Tuomy-Wilhoit played Stamos' on-screen son for three years, and captured America's heart in the process. And when he learned that his TV dad from back in the day was going to be a real-life father, he explained that there was no one better suited for the job. According to E! News, he said:

I recently heard the news about John and Caitlin's baby on the way. A huge congratulations! He is going to be a great father. I mean, look at me, I turned out great.

And it seems that Tuomy-Wilhoit is correct. Stamos' character on Full House may have been just that, a character. But his acting with younger actors Mary-Kate Olsen and Ashley Olsen, along with Dylan Tuomy-Wilhoit and his brother, seems pretty genuine.

Stamos also seems extremely confident in his parenting abilities. In his interview with People, Stamos explained:

We have the same morals and the same values, that all clicked nicely. So we said, "Oh, well, maybe we should have a family."

Stamos also revealed that it was McHugh's idea for them to try and get pregnant before they were married. '"Maybe we should have a kid [before we get married]' and I said, 'Why?'" Stamos recalled in his interview with People, then adding that McHugh jokingly responded with, "Because you’re old."

Stamos and McHugh have had quite a whirlwind romance, resulting in an actual fairytale proposal at Disneyland this past October. In fact, Stamos is so taken with McHugh that, for his proposal, he took her to one of her favorite places in the world, and went the extra mile to make sure the moment was perfect. Stamos' representative told E! News at the time:

John proposed to his girlfriend Caitlin McHugh on Sunday afternoon at Disneyland. He cut together a film of some of the most romantic moments in Disney and Pixar animation. The film concluded with Sebastian from The Little Mermaid encouraging John to "Just ask the girl." Caitlin said yes, then John whisked her to 21 Royal where they shared the news and celebrated with their families.

Now the happy couple and soon-to-be parents are on the fast track to starting a family of their very own — bringing Stamos one step closer to having is very own full house.

More Like This
Kim Kardashian Stars In Hilarious House Of The Dragon Parody, The Targashians
Khloé Kardashian Reveals Tristan Thompson Proposed To Her Last Year & Why She Said No
Lifelong Teacher Dr. Jill Biden Loves Watching Abbott Elementary Too
10 Parenting Lessons From Abbott Elementary That You'll Want To Write Down